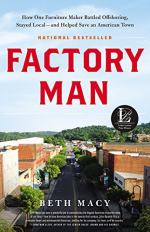 “Factory Man” by Beth Macy is the story of the famous Bassett family of Bassett furniture fame and fortune. The company began its operation in rural Virginia and quickly emerged as a leader in the US furniture-manufacturing industry. With its success came the need for more and more factories and more and more employees. A town aptly named “Bassett” sprung up around the main facility. At one time, Bassett, Virginia, boasted a population of more than 3,000 – the vast majority of which worked for Bassett Industries.

John Bassett III is named after his grandfather, J.D., who was one of the pioneering patriarchs of the family business. J.D. had taken the company to a multi-million dollar operation and eventually emerged as the number one furniture maker in the world. John’s father, Doug, was president of the company when John graduated from college. He surprised everyone by going off the reservation choosing not to take his rightful place in Bassett Furniture’s leadership team instead electing to join the Army. It was obvious that John was not cut from the same cloth as most of the other Bassetts.

When John returned from a three-year tour in Europe, he had matured and was ready for the responsibility of running the company. Doug thought that his son was brilliant but wild and unpredictable. When Doug came down with a terminal disease, he passed over his son and named Robert Spilman, his son-in-law, in the executive position that John was certain he would assume. He was young and decided to hold on. He was certain that he eventually he would take the reins of the company. But it wasn’t to be.

Spilman assigned John to run a factory in Mt. Airy. He was a threat to Spilman who didn’t like to have him around. John finally saw the light when Spilman’s son ascended into leadership and he was bypassed again. Although it stung, he realized later it was the best thing that ever happened to him. It made him a fighter. John struck out and bought his own furniture-making factory which proved to be a great success.

When Asian furniture manufacturers began to dip their toes into the American market, the stealth globalization of furniture making began. The Chinese furniture-makers undercut American prices and artificially drove down market prices. As a result, U.S. factories began closing and jobs were lost to low paid workers across the globe.

John wasn’t one to cave to the demands of the new market. He wanted to keep his plant operating and his workers employed. When he learned that he could fight underselling through the U.S. Commerce Department it fueled his determination to save his plant, his employees and the U.S. furniture-making industry. He singlehandedly waged a war against his Asian competitors and emerged victorious. But so much damage had been done that the victory was bittersweet.