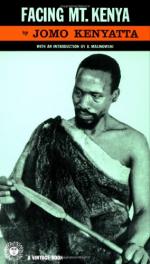 This detailed literature summary also contains Topics for Discussion and a Free Quiz on Facing Mount Kenya; the Tribal Life of Gikuyu by Jomo Kenyatta.

Facing Mount Kenya: The Tribal Life of Gikuyu by Jomo Kenyatta is an anthropological, psychological, social, economical and religious study of the African people living in Gikuyu, Kenya. Told from an African standpoint, the book shows both the rich culture of the Gikuyu people, as well as the dangers of European influence over a population of people whose entire lives are based on social customs and religious ideas.

The author, Kenyatta, is a highly respected anthropologist who also happens to be the grandson of a medicine man of the Gikuyu. As a member of the Gikuyu society, Kenyatta is able to accurately describe and explain the traditions and customs of the tribe without European bias and misunderstanding. He is able to present a complete account of tribal life, while at the same time analyzing the effects of new European rule over the Gikuyu and over their lands.

Kenyatta begins by explaining the origins of the Gikuyu nation, and the familial system used within the tribe. He continues to discuss the system of land tenure, which is vital to the Gikuyu. Their entire political, social, religious, and economic structures are based on land; therefore, Kenyatta spends much time explaining how land changes hand, how it is used, and the consequences of European rule over the area. Following this, Kenyatta explains the economic structure and barter system of the Gikuyu nation, as well as the division of labor. He then discusses the various businesses that operate within the tribe, such as ironworkers, hut-building, pottery, basket making, skin tanning, and other professions. Kenyatta next examines the educational system of the Gikuyu, and compares it to the new educational system implemented by the European missionaries. He points out several flaws in the new system, and explains why the old system is vital to the Gikuyu way of life.

Next, Kenyatta presents the controversial subject of clitoridectomy, and discusses its use and place within the Gikuyu tribe. He also discusses the passage of young men and women through the various stages of initiation as they become productive members of society, and explains what each new stage means to the young men and women. Sexual relations are explained in detail, as are marriage ceremonies and rites of passage. The Gikuyu government structure is also explained and compared against the new government of the European missionaries in an effort to again show how the intrusion of the European into the life of the Gikuyu has presented many problems and challenges.

Religion is also explained, and a comparison of ancestor worship and the worship of God is made to clarify the use of each within the Gikuyu society. Kenyatta also explains here how the influence of the Christian missionary has confused the Gikuyu, and why the Gikuyu foundation of life is damaged by Christian ideas. He also explains that the new religions of Africa, knows as the Watch Tower Movement, is a response to such conflicts of ideas, and he discusses how the group has risen, and the consequences of their power over the people. Kenyatta also discusses the use of magic within the Gikuyu nation, and the power or medicine men, or healers. Kenyatta concludes with a discussion of the dangers of European influence, a call for understanding of Gikuyu customs and laws, and an urging for all who seek to help the Gikuyu to first learn their culture, history, and social customs in an effort to allow for progress without a loss of individuality and cultural identity.