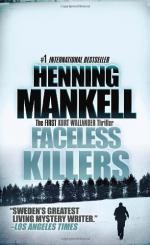 Henning Mankell
This Study Guide consists of approximately 36 pages of chapter summaries, quotes, character analysis, themes, and more - everything you need to sharpen your knowledge of Faceless Killers.

The noose tied around Maria Lövgren's neck is foreign, perhaps Argentinean, one of the clues that the murderers are not native Swedes.

The horse belonging to the murder victims does not whinny in the night, which wakes the neighbor, alerting him to the crime. Wallander focuses on the horse because it seems odd that the murderer gave hay to the animal.

When Johannes goes to the bank to withdraw money to pay to his mistress, he brings a brown briefcase with a cracked handle to carry the cash. The briefcase of money is missing from the crime scene.

Johannes receives a receipt for his withdrawal, with his name and address, and the amount of his withdrawal, at the bank. Then, he drops it on the floor. The withdrawal receipt is found by the murderers, who know...

More summaries and resources for teaching or studying Faceless Killers.