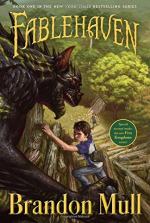 Mull, Brandon
This Study Guide consists of approximately 50 pages of chapter summaries, quotes, character analysis, themes, and more - everything you need to sharpen your knowledge of Fablehaven.

This detailed literature summary also contains Quotes and a Free Quiz on Fablehaven by Mull, Brandon .

NOTE: The word "preserve" is capitalized in the guide when referring to the grandparents' farm.

As the novel opens, two siblings named Kendra and Seth are about to visit with their paternal grandparents for the first time. The children are not particularly close to their grandparents, having spent limited time with them up to this point. The siblings' parents are going on a cruise, which is why they have convinced Grandpa to keep the children. Kendra and Seth meet the housekeeper Lena and another worker on the farm, Dale. Grandpa says he has lots of chores to attend and that Kendra and Seth can play anywhere in the house or the yard; however, the barn and forest are strictly off limits. A short time later Seth disobeys and heads into the forest. He thinks that he is more capable than Grandpa realizes .

Seth discovers an old woman living in an ivy-covered shack and a beautiful lake surrounded by an elaborate park. He convinces Kendra to go into the forest to see the lake, but Grandpa soon finds out about their disobedience. He threatens to make them remain in the playroom in the attic for the remainder of their stay. Then, he compromises by making them stay inside for a day and eliciting a promise that they will not disobey again.

Grandpa gives Kendra some keys and challenges her to figure out what they fit in the attic. Her quest leads her to a journal with only one instruction – "to drink the milk." Kendra correctly assumes this is the milk Dale puts out daily for the butterflies. When they are allowed outside again, Kendra and Seth taste the milk and immediately see that the butterflies are actually fairies. They soon learn that the entire farm is a Preserve set aside with an array of magical creatures. Some are outright dangerous, and none are actually friendly. Seth captures a fairy and accidentally turns it into an imp. The fairies retaliate, turning Seth into a strange creature. Grandpa and Dale have to take Seth into the woods where they ask Muriel – who is really a witch – to change him back. They discover all sorts of other magical creatures, including naiads, trolls, an ogress, and naiads.

On Midsummer Eve, Seth mistakenly allows magical creatures inside the house, and they take Grandpa and Lena hostage. Seth and Kendra discover that a chicken they have been caring for is actually Grandma. They free Muriel in return for changing Grandma back to her human form.

Seth, Grandma, and Kendra go to rescue Grandpa, but Seth and Grandpa wind up being captured by Muriel and a demon named Bahumat. Grandpa tells Kendra to run away, but she decides to try to save them. She begs the Fairy Queen for help, and an army of fairies come to her aid. They bind Muriel and Bahumat. Kendra discovers she can now see the magical creatures even without drinking the milk. As she and Seth prepare to return home, her grandparents promise they will return again soon.

More summaries and resources for teaching or studying Fablehaven .