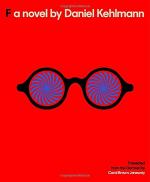 This detailed literature summary also contains Quotes and a Free Quiz on F by Daniel Kehlmann.

The story opens with a man driving his two twin sons to pick up his other son, by a previous marriage. Arthur, the father, is an unhappy man because he has not been able to become the world famous author that he feels he should have been. He blames many things for his lack of success, but in the end, the reader can tell that he is a very insecure and unfocused individual who does not care much for being married with children. In fact, Martin, the oldest child by his first marriage, never even met Arthur until he was seven years old. Martin recalls being very disappointed with the initial meeting.

The other two boys, the twins, are named Ivan and Eric. When they reach the theater, the boys discover that their father is taking them to see The Great Lindemann, a world famous hypnotist. During the course of the show the hypnotist brings the boys each up on the stage and has them doing all sorts of things. Finally, he encourages Arthur to come on stage. He does so begrudgingly. The hypnotist can tell from a quick discussion with Arthur, while under hypnosis, that he is a very unfulfilled individual. He makes the hypnotic suggestion that Arthur should give up living a mundane life and pursue his dreams. Arthur wakes up, takes the boys to Martin's mom's house, and then drives away...never to be seen again. A few years later, Arthur's first novel, My Name is No One becomes a runaway bestseller. Martin fixates on the rubix cube and decides that he's going to be a world champion. He never is.

Many years pass and the boys are grown. Martin still plays with the rubix cube, and has some marginal success. Eric has become a stock broker and financial investor in a prominent company in the city. Ivan is an art curator and has told everyone that he is gay. All three men are living lies in their lives because none of them are telling the truth and in many instances are cheating those around them. Eric is cheating on many levels. He's cheating on his wife, Laura, and he's defrauded millions of dollars from his clients over the years. Ivan, after running into the Great Lindemann in Europe decides that he doesn't have what it takes to be a true artist, and instead becomes an apprentice to someone he calls a 'true artist', Heinrich Eulenboek. Heinrich painted for a while, but then seemed to have gone into a slump. When Ivan visits him, he knows why. Heinrich's hands have a type of palsy. Ivan begins to paint for him, and together the two of them continue the farce, making both of them very wealthy. Martin is lying because he is a priest, but has no faith. He doesn't believe that God cares at all about the people who attend the church each week. He just goes through the process and cashes his check.

Eric begins to lose touch with reality when he learns that many of his clients have begun to figure out that he's been mishandling their funds. Eric thinks of all the possible scenarios in which he gets away and can think of nothing. He has resorted to taking lots of medications and almost ends up overdosing on them. In a psychotic break he rambles and almost has a heart attack in his office building. He asks his secretary to make an appointment with his brother for lunch. In error she calls Martin, who comes right away. Eric really wanted to see Ivan, his twin. Later, he calls Ivan, but changes his mind about telling his twin about the trouble that he's in. He goes for a walk in the park and two children tell him to stay away from the three teen boys by the food vendor's truck.

Ivan is experiencing his own crisis in that people have begun to suspect that there is something particularly wrong with some of the Eulenbroek paintings that have been authenticated. Heinrich, who had ended up being Ivan's lover, has long since died, leaving Ivan as the executor for all things Eulenbroek. Ivan is afraid that he's going to be discovered. He goes out for a walk to clear his mind and sees three teens beating up a fourth teen on the ground near a food vendor's truck. He tries to intervene, but is stabbed by one of the teens. The boys all run away except for the one on the ground. The one on the ground, whose name is Ron, slowly gets up, takes Ivan's wallet, pockets the cash, then leaves Ivan bleeding on the street. No one comes to help. Ivan barely makes it to his apartment where he bleeds to death.

Eric decides to hide out in the church basement where Martin works. He stays there for nearly four years. During this time his daughter, Marie, visits him. They often go to the zoo or to see a movie. Marie, the reader learns, is bright, and isn't given to flights of fancy like the adults in her family. She has the ability to view things from a logical standpoint, to accept things as they truly appear, and sees below the surface to see the truth nature of something. Arthur, meanwhile, has surfaced. He has become a world famous author, but has realized that without family to share it with, it is meaningless. He reaches out to his only grandchild, Marie. They talk via email for a while, and then he visits, taking her to a local carnival.

Once at the carnival they go to a fortune teller, who is none other than the great Lindemann. He attempts to read the cards for them, but he is so old, and partially deaf and blind, that Arthur tells Marie that she shouldn't put much stock in what the man might have to say to her. Finally, frustrated with the tarot cards, Arthur tells Lindemann that he's a fraud and takes Marie. They leave and Arthur tells Marie that she's to never let anyone tell her what her fate will be, that she is to choose for herself.

Meanwhile, though no one has found Ivan's body for four years, has been declared officially dead. This makes Eric the sole executor of the large art collection. It is enough to get him out of debt. That there has been an economic depression has also covered his earlier fraudulent activities and he feels as if he can now emerge from the church's basement. Martin is still as bitter and resigned as ever. The story ends with Arthur attempting to undo the damage he did to his children, realizing that he really can't, and focusing his attention on making things better for his granddaughter.