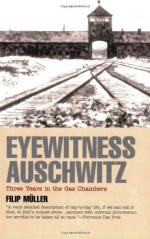 Filip Müller
This Study Guide consists of approximately 30 pages of chapter summaries, quotes, character analysis, themes, and more - everything you need to sharpen your knowledge of Eyewitness Auschwitz.

This detailed literature summary also contains Topics for Discussion and a Free Quiz on Eyewitness Auschwitz: Three Years in the Gas Chambers by Filip Müller.

Muller, a Slovakian Jew, was born in Sered, Czechoslovakia, in 1922. In April, 1942 he was forcibly evacuated to Auschwitz I concentration camp with thousands of other Jews. Muller, like many others, was used as forced labor for about a one month period during which his health declined. One day he and his bunkmate, afflicted by thirst, sneaked to a feeding area and illicitly stole several drinks of tea. Caught in the act, the two men were beaten by Nazi guards and then assigned to Auschwitz's Sonderkommando, a group of inmates forced to work at corpse disposal through burial or, much more commonly, cremation. From May, 1942, until the evacuation of Auschwitz Muller worked as a Sonderkommando. His first assignment was to strip corpses of their clothing. The Nazis soon discovered that a more-efficient method of genocide required the victims to strip naked prior to being gassed. For several weeks thereafter, Muller worked collecting, sorting, and transporting belongings.

Muller's assignments eventually ran the gamut of the Sonderkommando and it appears that most of his time was forcibly devoted to corpse disposal by incineration. He would transport corpses to crematoria ovens, load corpses onto carts, and feed them into the ovens. During other periods, he worked disposing of bodies in open-pit cremation. He was on most occasions apparently spared the terrible duty of ash removal. An eyewitness to the operations at Auschwitz, Muller witnessed the mass executions of perhaps as many as a quarter of a million people and was present in the camp for the mass executions of over one million people. Obviously possessed of great strength and a nearly supernatural constitution, Muller survived numerous hardships, tortures, and selections for the next many months and eventually participated in the dismantling of the Auschwitz II-Birkenau crematoria in a Nazi attempt to hide the evidence of their monstrous crimes. In January, 1945, Muller and others were evacuated from Auschwitz in front of the Soviet army's advance. In May, 1945, Muller was liberated from Nazi enslavement by the advancing American army. Further autobiographic details are not offered in the text.

More summaries and resources for teaching or studying Eyewitness Auschwitz: Three Years in the Gas Chambers.