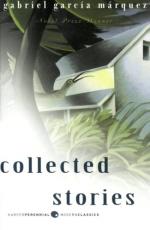 Gabriel García Márquez
This Study Guide consists of approximately 38 pages of chapter summaries, quotes, character analysis, themes, and more - everything you need to sharpen your knowledge of Eyes of a Blue Dog.

One Hundred Years of Solitude (1967) is García Márquez's masterpiece of magic realism. Tracing the history of a family in a small Colombian town, the work incorporates elements of mythical fantasy, the supernatural, and political commentary into its compelling narrative.

Richard Linklater's animated film Waking Life (2001) follows a man through a dream world in which he contemplates questions about meaning, perception, and human existence.

The House of the Spirits, which first appeared in English in 1985, is Isabel Allende's first widely successful novel, and through a sophisticated use of magic realism it tells the story of four women characters that have various kinds of relationships with the passionate and violent Esteban Trueba.

Jorge Luis Borges's short story "The Garden of Forking Paths" (1941) is an intriguing mystery tale as well as an exploration of philosophical questions about time, perception...

More summaries and resources for teaching or studying Eyes of a Blue Dog.

Eyes of a Blue Dog from Gale. ©2005-2006 Thomson Gale, a part of the Thomson Corporation. All rights reserved.