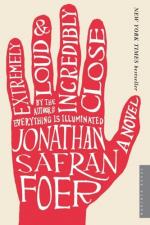 Jonathan Safran Foer
This Study Guide consists of approximately 45 pages of chapter summaries, quotes, character analysis, themes, and more - everything you need to sharpen your knowledge of Extremely Loud and Incredibly Close.

This detailed literature summary also contains Topics for Discussion and a Free Quiz on Extremely Loud and Incredibly Close by Jonathan Safran Foer.

Extremely Loud and Incredibly Close by Jonathan Foer looks at a precocious, psychologically scarred boy's quest to learn how his Dad died on 11 Sep. 2001 in the World Trade Center.

Nine-year old Oskar Schell lives in Manhattan with his protective Mom. Grandma across the street is his usual caretaker and confidant. Grandpa is gone and not to be discussed. Oskar's beloved Dad perished on September 11, 2001, but lives in Oskar's memory, tucking him in, telling stories, and challenging him to searches. When Oskar finds a mysterious key in Dad's closet, he begins a quixotic quest for the lock it opens, owned, he believes, by someone surnamed Black. Oskar learns many things and commits youthful faux pas, but discovers nothing about the key. He wonders why Mom lets him wander so freely, how people know his name before he gives it, and how he recruits his elderly sidekick, Mr. Black upstairs with such ease. Oskar is fascinated by the atomic bombing of Hiroshima and worries his psychiatrist may hospitalize him. Over six months, Oskar learns only that one of his Blacks also perished on 9/11, and Oskar is conflicted that the strange woman might have held hands with Dad at the end.

Oskar unknowingly meets his Grandpa Thomas, who has been Grandma's "renter" since the "worst day." Desperate to talk about old Mr. Black dropping out of the search, Oskar tells Grandpa his full story and plays for him Dad's final phone messages, which no one else has heard. Over the decades, Thomas, writes three letters to his son. In 1963, he explains his abandonment, having lost the ability to speak and interest in sculpting, marrying a frenetic woman whom he encourages to write her life's story, which turns out to be blank. Learning she has broken her promise and is pregnant, Thomas returns to Germany, expecting no forgiveness, but professing love for his unborn son. In 1978, Thomas writes his teenage son about the Allied bombing of Dresden on Febraury 13, 1945, in which he is badly injured and loses his parents and pregnant lover Anna, Grandma's sister. Finally, in 2003, Thomas fills his last daybook with how he learns about 9/11, returns to New York, moves in awkwardly with Grandma, tails Oskar and Mr. Black around the city, and needs again to flee.

Grandma writes Oskar a letter about her life, beginning with her childhood in Dresden with her sister Anna and Anna's boyfriend, Thomas, whom Grandma later marries in America. He sculpts Anna while looking at Grandma. Their sex life is sorrowful and life together destroyed by rules. She follows Grandpa to the airport to keep him from leaving when she announces she has broken the rule and become pregnant. Her mind returns to her childhood in wartime Dresden. Grandma cares for Oskar on the day she loses her only son, and considers her family's suffering in Dresden necessary to produce Oskar. Grandpa runs away again after helping Oskar dig up his Dad's grave, but Grandma follows him to the airport and talks him into living together there with her. All of her dreams run backwards. She reminds her grandson that one must always express love when it is there, rather than waiting for a supposed better time.

Oskar loses interest in his quest after losing Mr. Black, but learns that one of his first visits could have solved his mystery. The vase is an anniversary gift for his Mom, bought at an estate sale by his Dad. It has nothing to do with 9/11. This discovery makes Oskar go forward with plans to dig up Dad's empty coffin with Grandma's renter, who wants to bury many letters to his lost son. Unable to sleep that night, Oskar thinks about all the events of September 8 & 9, 2001 running backwards, leaving him safe.

More summaries and resources for teaching or studying Extremely Loud and Incredibly Close.