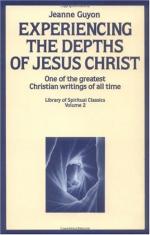 Experiencing the Depth of Jesus Christ: The Autobiography Summary & Study Guide includes comprehensive information and analysis to help you understand the book. This study guide contains the following sections:

This detailed literature summary also contains Topics for Discussion and a Free Quiz on Experiencing the Depth of Jesus Christ: The Autobiography by Jeanne Marie Bouvier de la Motte Guyon.

Jeanne Guyon begins by saying that some people believe they can never be truly close to Jesus Christ and she says that simply isn't true. She says that it begins with a yielding of the heart and that anyone with a heart can accomplish this. She also says this kind of relationship must be centered on prayer, but that a prayer from the mind is not adequate because selfish desires and distractions will interrupt prayer that comes only from the mind. Guyon goes on to say that a closer walk with Jesus Christ does impact selfish desires in that those desires no longer have the importance they once had if you are truly walking with Him.

Guyon explains that the person who diligently seeks out a full prayer life will eventually lose himself in that prayer life. She warns that this takes a person willing to turn himself inward from selfish desires, and that this inward turning will be repeated time and again, as the human nature is to turn away. She warns that it takes time to create a strong foundation of this practice and warns that it cannot become a ritual. She also warns that an hour or two each day is not sufficient, but that it must become a condition that is continual.

Guyon describes several methods used along the way to this point, but repeatedly points out that all involve being still and listening. Some people have to find a quiet place away from distractions.

Guyon says that reading a practical, simple scripture is one effective way to begin the process. She says that it's vital to remember that the ultimate goal is not study, but to find the inner sense of the meaning, allowing God to send this understanding. At the highest level of turning inward is what Guyon refers to as "Divine Union." She says this is a point at which the person is completely at one with God.

Guyon's book was not originally intended for general circulation but was written in the 1600s as a guide for a few of her friends who sought a deeper relationship with the Lord. The book was eventually used to have Guyon arrested, though she was later hailed as one of the most influential women of the church and an important woman in the history of France. The final chapter of the book is written by Guyon in prison as she offers advice to a woman who had written to her. In that passage, she reminds the reader to take nourishment from the Lord "as often as you can."

More summaries and resources for teaching or studying Experiencing the Depth of Jesus Christ: The Autobiography.

Experiencing the Depth of Jesus Christ: The Autobiography from BookRags. (c)2022 BookRags, Inc. All rights reserved.