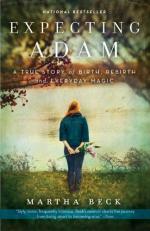 Martha Beck
This Study Guide consists of approximately 28 pages of chapter summaries, quotes, character analysis, themes, and more - everything you need to sharpen your knowledge of Expecting Adam.

John bought alphabet letters to put on the refrigerator in hopes of teaching Katie to read. These letters became something of a game between John and Martha as they attempted to make phrases out of the letters that were often left after Katie lost or flushed them down the toilet.

Martha and John were both big lovers of chocolate chip cookies and would often eat them during stressful times.

Martha Beck went to the Harvard Coop to buy a book on Down syndrome and the only book she could find was a textbook on teaching mentally retarded children to learn with several Down syndrome children on the cover. This book stated that Down syndrome had an IQ that was nearly as low as that of a tree.

Ms. Beck buys a sweatsuit with Harvard written on it for...