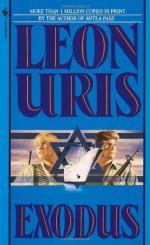 Leon Uris
This Study Guide consists of approximately 111 pages of chapter summaries, quotes, character analysis, themes, and more - everything you need to sharpen your knowledge of Exodus.

Exodus is the epic story of two generations of Jews striving to reclaim Palestine as a homeland after 2,000 years of dispersion.

On Cyprus in 1946, long-lost American friends reunite. Mark Parker is a foreign correspondent, and Kitty Fremont is a nurse. Meanwhile, two other old friends, Ari Ben Canaan and David Ben Ami, from the Jewish underground, also secretly reunite. Mossad is training and re-moralizing the Jews detained in British camps for the coming battle over Palestine. Ari risks 300 children aboard the ship Exodus in an attempt to save 250,000 desperate people in Europe. Kitty is gradually moved from hearing detainees' stories about surviving the Holocaust. Karen Hansen Clement becomes Kitty's ward, and she tells the harrowing story of Dov Landau surviving the Warsaw Ghetto and Auschwitz. Kitty is convinced to join Ari's plot, not knowing that the Exodus is intended to awaken the world to the inhumanity of British Mandate policy, with Mark as publicist. The Exodus is wired to explode if the British attack. A standoff develops, and Ari raises the stakes through a hunger strike. He reveals a suicide pact that makes London "Let my people go!"

In the 19th century, Ari's father Jossi and uncle Yakov are driven by a Russian pogrom, a violent anti-Jewish riot, to seek refuge in Palestine. They find Palestine disappointing because the Jews are too proud to farm and spoiled by money pouring in from overseas philanthropists. Jossi works to understand the Arab mentality and use controlled force to gain their respect. When the Jews restore Hebrew as a national language, the brothers become Akiva and Barak. After World War I, the Balfour Declaration falls short of being the "Magna Carta of the Jewish people," who reclaim the land as the Arabs organize for holy war. The brothers, both important in Yishuv government, are divided over the use of terrorism against Britain, which overlooks Yishuv contributions and Arab treachery.

Kitty accepts a job, hoping to take Karen to America, and on Mount Tabor, she comes to understand that the Yishuv is the continuation of the biblical heroes and that God is with them. The British commanders sympathize openly with the "Final Solution" and use Nazi methods, met in kind by the Maccabees. Johann Clement is driven insane with survivor guilt, and Dov disappears into the Maccabee underground. Karen is convinced to leave, but when Dov is captured with aged Akiva and sentenced to hang, a daring prison break keeps the women in Palestine to care for Ari, who was badly wounded during the escape. With Ari safe, Kitty resumes wrestling over what is best for Karen.

The U.N. partitions Palestine, and the Arabs scream, "Death to the Jews." During the War of Liberation, Haganah gradually prevails over the three Arab generals who vie for fame. They adopt the tactic of siege warfare. The Jews' victory at Safed, wrongly rumored to be through use of an atom bomb, frightens the Arabs, who flee to Lebanon. Israel proclaims independence and gradually outfights and outmaneuvers the boasting, ineffective and disorganized Arab nations. Ari, a senior commander, must order the destruction of the Arab village he and his father have built. David dies, fighting to redeem Jerusalem. The U.N. calls a truce, and Barak produces a report on the Palestinian refugee problem.

Israel strains to absorb massive immigration and defend against expected new warfare. Barak dies, guilty about his children's destiny, and he is buried beside Akiva. Kitty prepares to go home, without Karen, who is a dedicated army nurse. Word comes of Karen's death en route to a Passover celebration timed with Kitty's departure. Even Ari is shaken by the cost of war, and Sutherland embraces Judaism by presiding over the Exodus story.

More summaries and resources for teaching or studying Exodus.