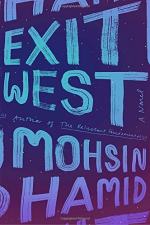 Mohsin Hamid
This Study Guide consists of approximately 52 pages of chapter summaries, quotes, character analysis, themes, and more - everything you need to sharpen your knowledge of Exit West.

This detailed literature summary also contains Quotes and a Free Quiz on Exit West: A Novel by Mohsin Hamid.

The following version of this book was used to create this guide: Hamid, Mohsin. Exit West: A Novel. New York: Riverhead Books, 2017.

The novel, which is told through the third-person omniscient perspective, opens on the first meeting between its two central characters, Saeed and Nadia, in a class on corporate branding. Although Nadia at first refuses Saeed’s flirtations, they eventually go out for coffee and have a good time. Nadia invites Saeed back to her house, where they smoke weed and eventually hold hands.

Background is given on both characters. Saeed lives with his parents, who met in the city years ago. Meanwhile, Nadia’s irreverence towards religion and her general rebellious attitude causes a rift with her family and she moves into a rented studio apartment by herself. As the militants begin to take over and the violence in the city escalates, they cling to one another. When a curfew is imposed, Nadia and Saeed begin to meet during the day. Nadia spends her lunch hours stocking up on supplies, while Saeed brings her supplies like a kerosene stove and candles.

After Saeed’s mother is shot by a stray bullet, Nadia and Saeed are determined to leave the country. Saeed’s father refuses to leave with them, and Nadia promises him that she will protect his son. With the help of a hired agent, Saeed and Nadia escape through a so-called “special door,” which takes them to the Greek island of Mykonos.

At Mykonos, Nadia and Saeed set up camp. When Saeed rejects one of Nadia’s kisses, Nadia observes a new streak of “bitterness” in Saeed, who she notes was never bitter before. As a bonding activity, Nadia proposes that they explore the island like tourists. When Nadia falls on the rocks and scrapes her arm, they head to a clinic, where she befriends the female volunteer who bandages her arm. The girl eventually takes them a door, which brings them to London.

In London, they come out the other side of the door in a mansion. Over the course of weekend, other migrants arrive from Guatemala, Indonesia, and Nigeria. While Nadia integrates into this community and eventually joins the Nigerians’ elder council, Saeed begins to spend more time at a nearby house filled with people from their home country. Meanwhile, tensions are rising between migrants who are arriving in greater and greater numbers every day, and nativists who want to “reclaim Britain for Britain” (135. There is talk of warfare and of a large-scale migrant massacre. Saeed buys a gun, and returns it. The massacre does not happen, and the nativists accept the need to coexist.

Saeed and Nadia get work on a construction site outside of London. The work is hard and the hours are long. They grow increasingly distant, and in an effort to repair their relationship, Nadia suggests that they move to Marin, outside San Francisco. In Marin, they set up a cardboard shanty on a hilltop with a strong wireless data signal. Nadia gets a job at a food co-operative, while Saeed gets involved with a local religious organization led by an African American preacher. Eventually, Nadia moves out of the shanty and into a storage room in the cooperative. Saeed gets more involved with the preacher’s daughter, and Nadia starts seeing the cooperative’s female head cook.

The last chapter is set half a century in the future. Nadia has returned to their city for the first time, and meets with Saeed for coffee at a nearby café. Gradually, their conversation develops into a playful rhythm. Nadia wonders what would have happened had she agreed to marry Saeed, and Saeed wonders what would have happened had he agreed to have sex with Nadia. As they leave the café, Saeed tells Nadia that he will one day take her to the deserts in Chile. She says that sounds nice, and they embrace without knowing whether that day will ever come.

More summaries and resources for teaching or studying Exit West: A Novel.