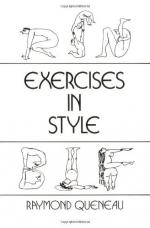 These next five variations tell the story from the perspective of the various senses.

Olfactory, referring to the sense of smell. In this exercise, the event is described in terms of how it smelled. "...there was a certain scent of long juvenile neck, a certain perspiration of plaited cord, a certain pungency of anger ..."

Gustatory, referring to the sense of taste. This variation is described in terms of how the narrator imagines it might taste. "Next we sampled the chewing gum of dispute, the chestnuts of irritation, the grapes of wrath, and a bunch of bitterness."

Tactile, referring to the sense of touch. In this version, the encounter is described in terms of how the narrator imagines it might feel to the touch. "...your finger can even touch human clottishness, slightly viscous and gummy on account of the heat."

(read more from the Section 8 Summary)