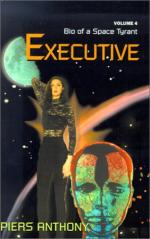 This detailed literature summary also contains Topics for Discussion and a Free Quiz on Executive by Piers Anthony.

Hope Hubris is the recently appointed head of the United States of Jupiter. He has circumvented the Congressional protocols, with his sister Spirit's help, to be appointed Tyrant, replacing President Tocsin. He urgently needs to balance the budget, in order to keep the nation from collapse, and he has to do this in the atmosphere of constant threats from the Communist planet of Saturn; he is also constantly distracted by erotic hi-jinks with the women in his staff. After facing down a threat from Saturn, Hope enters a playful and ultimately fulfilling affair with Amber, a girl of fifteen. When she bores him, he goes undercover and works his way up to a position of leadership and respect at Jupiter Bubble Company, which produces the bubbles people live in. As both Tyrant and President of Jupiter Bubble, Hope Hubris is now both the man who is overwhelmed by political responsibilities, and the man who is competent at managing definite tasks. In the end, his wife Megan leads the Resistance and ultimately deposes him, and the U.S. of Jupiter returns to a democracy.

In addition to the industrial and financial crises mounting around the Tyrancy, Hope has to confront a secret Saturnine mission to take over the Jupiter moon of Ganymede. This will put a knife to Jupiter's throat, by mounting destructive military capabilities very close to Jupiter, and Hope has to flirt with the possibility of total destruction of Saturn and Jupiter both, in order to face down the Saturnine threat.

Hope's victory wins him the respect of Admiral Khukov, who becomes the Saturnine leader, and Khukov gives Hope a gift of a young girl of thirteen. Amber seems to be a mute, but turns out to be a lingual idiot savant, with fluency in many languages. She helps Hope by eavesdropping on people who confer in other languages, and then she becomes a sexual partner of his, after sending him 'feelie chips' that depict her imagination of their union. This affair concerns him as he is organizing his government policies, but when he finally discovers her identity, he becomes bored with her fairly quickly—she was a good puzzle, but not as good a partner.

Throughout the last part of the book, Hope Hubris is occupied with learning the ropes in Jupiter Bubble, and he rises to the point of leading the company. He becomes a respected businessman, and as such, an articulate critic of the Tyrancy. When the Resistance develops, he is named as the mediator in the Resistance debate with the Tyrant. When he shows up for the debate, Hope/Jose finds that the Resistance is led by Megan, the wife who would not follow him into politics. The narrative ends there, as the shock of finding that his sane wife is leading the opposition pushes Hope out of politics, and the U.S. of Jupiter returns to being a democracy.