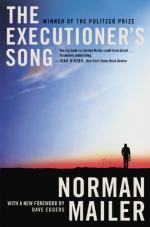 Norman Mailer
This Study Guide consists of approximately 89 pages of chapter summaries, quotes, character analysis, themes, and more - everything you need to sharpen your knowledge of The Executioner's Song.

This detailed literature summary also contains Literary Precedents and a Free Quiz on The Executioner's Song by Norman Mailer.

Norman Mailer's Executioner's Song is many things, and its status between the realms of fiction and non-fiction makes it difficult to define. It is not non-fiction, notwithstanding the author's claim in his Afterword. The Pulitzer Prize Committee recognized Mailer's work as a "...thoroughly imagined work of fiction." This novel is not a work of non-fiction, but it is also not wholly a work of fiction. The book's form causes us to examine the line between reality and perception. What is the truth? How is truth colored by the telling of it, whether through a novel or through the rules of a trial? Are the points of view about Gilmore that Mailer describes "truth" in any way?

Executioner's Song is the novelized story of the life and death of Gary Mark Gilmore, the first person to be legally executed in the United States following a ten-year hiatus on executions imposed by the U.S. Supreme Court. The execution occurs in Utah, the center of the Mormon religion. The background of the Mormon culture, with its history of blood atonement, plays a role in the novel.

Mailer romanticizes Gilmore's life and death, painting him often as a heroic figure. Still, it is clear that Gilmore is a career criminal who chooses the path his life takes while still a pre-teen and pointlessly kills two people. Is Mailer biased toward Gilmore, showing him as something he is not? Is Mailer creating a commentary on perception and how Gilmore is perceived in the media and elsewhere? The presentation of Gilmore's character, whether purposefully or not, makes us wonder what is reality and what is perception. Ultimately, the whole book is colored by Mailer's perceptions and intentions, as is all media, to some degree and sometimes insidiously.

Mailer's work begins with the story of Gilmore's parole from Marion State Penitentiary in Illinois. Gilmore is transferred to the mid-west institution from Oregon State Penitentiary, where he had helped instigate a prison riot and where he had been forced to take the drug Prolixin to subdue his aggression. Gary and some of his apologist friends blame the drug for some of Gary's later behavior, but the claims appear weak in the presence of Gilmore's long-established behavior patterns. Gary is released from Marion in 1976, into the sponsorship of Brenda, his cousin, who lives in the Mormon enclave of Provo, Utah, home of Brigham Young University. Brenda arranges a job for Gary, working for her father Vern, who is married to Ida. Vern owns and operates a shoe repair shop. He is an accomplished cobbler and hires Gary as an assistant. He also provides lodging for Gary, living with him and Ida.

According to Vern, Gary is a hard worker but totally inexperienced. He wants badly to fit in with the guys in the shop, and everyone is friendly to him. However, Gary wants to develop his cobbler skills over night and becomes testy when Vern cannot pay total attention to his training. Gary is a continuous beer drinker - a beverage he brags that he never pays for but always shoplifts - and frequently "borrows" money from Vern. Quickly, his welcome grows thin, but Vern is too nice of a guy to say anything. Brenda, however, scolds Gary for borrowing so much money from her father and suggests that it might be time for Gary to find new digs. This he does by going to work for another charitable boss, who also arranges a place for him to stay and puts up the down payment for an old Mustang. The Mustang plays a key role in Gary establishing a lusty relationship with Nicole, a 20-year-old beauty who has already been married three times and has two children. Nicole owns a Mustang exactly like Gary's, and she sees that as a cosmic sign of their intertwined destinies.

Gary and Nicole enter into a relationship of hard, animal sex, fraught with all of the complications of anger, jealousy, ego and attitude that might be expected from two young and totally undisciplined lovers. Gary quickly gets into trouble, going on a binge that takes him to Idaho, where he assaults a homosexual man and steals his vehicle. The Idaho authorities cut Gary loose at the urging of Mont Court, Gary's parole officer in Utah. This is only one of several jams Court bails the criminal out of, looking for a trusting, touchy-feely relationship with the slick but hardened con. Sterner action by Court on this and at least one other occasion might have prevented the two murders that Gary later commits in Provo. Gary continues to steal and, on one burglary, breaks into a gun shop. Then, he starts showing off the merchandise he has purloined. The eventual murder weapon is in that lot of goods. He also gives a gun to Nicole, who ends up pointing it at him after one of their arguments.

When Gary's Mustang keeps breaking down, he falls in love with a white pickup on the same lot, but he doesn't have the money to buy it. He finally cons the lot owner into giving him the truck with the promise of a $400 payment in a week's time. Gary tries to borrow from all of his friends, but everyone is pretty wise to him now. When that approach fails, he chooses a remote all-night gas station to rob, and then he murders the attendant execution-style. He is accompanied by April, Nicole's 12-year-old sister, an acid-high tweaker with serious underlying emotional issues. She is so spaced out that she stays in the truck while Gary does the murder, and she is totally unaware of anything out of the ordinary. After the murder, April spends the night with Gary at the local Travel Lodge Motel.

The next night, Gary travels solo to the City Center Motel. He robs the motel and commits his second execution-style murder. He is seen running from the motel carrying a gun and the cash drawer. He throws the gun in some bushes, but he shoots himself in the hand in the process. He leaves a trail of blood from the bushes to the service station where the white truck is parked, and the attendant at the station writes down Gary's license number. The night ends in a peaceful surrender to the cops, during which Gary forgets to put his truck in park. It rolls off into a drainage ditch, an ignoble end for an object desirable enough to cause a man to kill two people.

The second book of this two-book tome tells the tale of the media circus Gary Gilmore creates by accepting the death penalty handed down by the Utah courts. He insists they follow through with it and chooses a firing squad as the means of carrying out the sentence. Quickly, the world media takes over the Hyatt in Salt Lake City, replete with TV producers, charlatans and fast-buck artists, including such notables as the ever-cool Geraldo Rivera. Always sensitive to the outside world's view of this peculiar state as a bucolic enclave of religious eccentrics, the governor and others high in state government are not eager to win the reputation as the first state to defy the Supreme Court ban on capital punishment, especially by firing squad. Sam Smith, the warden of the Utah State Penitentiary, and the attorneys representing Gary, however, are adamant that the state follow through with its sentence. Organizations such as the ACLU and NAACP get involved in trying to stop the execution, as does the attorney for another condemned murderer who is afraid a Gilmore precedent will get his client killed. Gary's insistence on dying creates some strange bed fellows, as traditional adversaries, the Attorney General's Office and the team of defense attorneys, join forces. They manage to get a couple of stays of execution, which are then quickly overturned in a prolonged game of legal brinkmanship. The last stay is overturned by a three-judge panel of the Tenth Circuit Court of Appeals just a few minutes before the execution.

In the final couple of chapters, Mailer ties up a few loose ends. Nicole goes to Southern California for a few months and then relocates to somewhere in Oregon. She tries to remain faithful to Gary for a while, claiming she senses his presence during that period, but she soon reverts to her old habits, picking up a hitchhiker and taking him to bed. One of Gary's Mormon apologists claims the murderer comes to him in a vision to let him know that everything is okay and how cool it is to be able to walk through walls. Vern's knee condition gets worse, and he has to give up his shop. Bessie's health also continues to deteriorate up in Portland. Gary's attorneys sprinkle his ashes from an airplane above Spanish Fork, Utah, following Gary's last instruction and his last act of defiance. It is illegal to spread human ashes in the pristine Mormon air of the Beehive State.

More summaries and resources for teaching or studying The Executioner's Song.