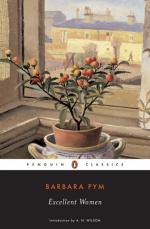 Barbara Pym
This Study Guide consists of approximately 35 pages of chapter summaries, quotes, character analysis, themes, and more - everything you need to sharpen your knowledge of Excellent Women.

"Excellent Women" by Barbara Pym is the story of Mildred Lathbury, an unmarried woman just over the age of 30. Mildred is an average woman with mousy brown hair who puts little thought into her appearance or outward image. Mildred lives in a flat in London and has a career as a social worker at the Society for Aged Gentlewomen. Mildred's needs are few so she only works in the mornings at the Society and spends her afternoons doing work for St. Mary's Church as well as helping the pastor, Julian Malory, and his sister, Winifred, with various tasks.

As the daughter of a clergyman, Mildred is well-versed in the needs and traditions of the church. Having grown up in a vicarage, Mildred knows the importance of service. Unfortunately, that characteristic often takes over and Mildred spends a lot of time doing work for other people instead of focusing on her life and relationships. While service is an admirable thing, Mildred often takes it to extremes and many people may see her as being one who interferes in other people's business. Mildred begins to realize this when people begin to request help from Mildred in areas with which she is not comfortable. At one point Mildred tells a friend that she is tired of taking on other people's burdens.

The story also revolves around the concept of excellent women, those who are sensible and capable enough to live life on their own terms. In a society that values marriage, and often looks down on the unmarried as being unworthy, Mildred often finds it hard to maintain any sense of self-esteem or worth.

Julian and Winifred Malory play a large part in the story. The brother and sister are Mildred's closest friends in London, and they spend a large amount of time together. The relationship falters when the Malorys take in a tenant, a widow who captures Julian's heart. This relationship causes jealousy in Mildred, who must confess to herself that she has feelings for the pastor.

Helena and Rocky Napier also play integral roles in the story. Mildred first meets Helena, when the woman moves into the flat across the hall. Helena is a vivacious woman, who is devoted to her career in anthropology. The idea of a career woman who has no desire to take part in the activities of her husband or to care for her home is shocking to Mildred. Shortly after the women meet, Rocky Napier returns home from military service in Italy. Unlike Mildred's first impressions of Helena, Mildred finds Rocky fascinating, charming, and attractive. Rocky and Mildred become friends.

It is clear that Rocky and Helena are not compatible as man and wife and after a heated argument, Helena leaves. Mildred gives in to the wishes of Rocky and then Helena and helps the couple reconcile.

In seeing the turbulent nature of the Napiers' marriage Mildred begins to believe that perhaps the others were right in saying that a woman does not need to marry in order to have a full life.

More summaries and resources for teaching or studying Excellent Women.

Excellent Women from Gale. ©2005-2006 Thomson Gale, a part of the Thomson Corporation. All rights reserved.