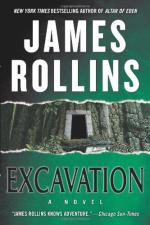 This detailed literature summary also contains Topics for Discussion and a Free Quiz on Excavation by James Rollins.

Excavation, by James Rollins, is the story of a group of archeologists that happen upon an Inca Indian site with a dark secret. The gold that the Incas found and revered has a dark purpose that no one could have guessed. It seems everyone wants the gold, called Satan's Blood, for some purpose and with part of the archeologist trapped underground it will take everything they have to get out of this alive.

Henry Conklin has started a dig site in the Peruvian Andes. Henry's nephew, Sam, along with several other grad students, become trapped in the ancient caverns. Henry is away in the states having a mummy from the site tested when he is suddenly taken hostage by a group of men dressed as monks. The monks are called the Keepers of the Question. Henry is soon told that Sam and the other grad students are trapped underground and that what these monks are after is an ancient gold called "Satan's Blood." The monks believe the Satan's Blood will give them the capability of calling Christ back to earth and initiating the second coming.

Sam and the other grad students are forced deeper and deeper into the caverns until they are in a secret tunnel system and find themselves in an ancient Inca burial chamber. They soon find that humanoid creatures are hunting them and Sam urges the group on. Sam and the others are able to get out alive but find themselves face to face with living ancient Inca tribe. The Incas have been alive for hundred years and depend on the mountain and Satan's Blood to keep them alive and healthy. The grad students soon realize that the hideous creatures in the caverns are the children that the Inca people have sacrificed to what they believe is their gods. Henry and the determined monks soon find Sam and the Inca village and kill everyone there in order to get the Satan's Blood. Sam and the others are able to trick the monks into one of the caverns where the creatures descend upon the men killing them all. Satan's Blood is discovered to be extremely explosive. Henry and the others escape after setting a fire in the temple where the Satan's Blood is located.

Two years later it is discovered that the Satan's Blood is actually from an alien planet and was sent with the intent of recreating their own civilization. The Satan's Blood has the capability of changing the human embryo into the alien form and that was its true purpose. The creature that has been created shows hostile behavior and looks like the hideous creatures that had been seen in the caverns.