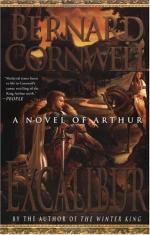 Excalibur: A Novel of Arthur Characters

Lord Derfel Cadarn is the narrator of the story of Arthur. As narrator he is portrayed as a scribe living in a small cell in the Christian monastery of Dinnewrac in the British kingdom of Powys working under the patronage of Queen Igraine.

In the tale of Arthur, Lord Derfel Cadarn is one of Arthur's most loyal and long time warriors. He is also, initially at least, a personal friend of the Druid Merlin and Merlin's companion Nimue. Derfel goes into the many battles in, which he participates, with his sword Hywelbane, and with the armor breastplate and face masked helmet of a warrior king.

Derfel's prowess as a swordsman is exemplified when he is challenged to single-handed combat by the Saxon King Aelle's champion as he goes to negotiate with the Saxons on behalf of Arthur. He is able to avoid the tricks of the champion and...