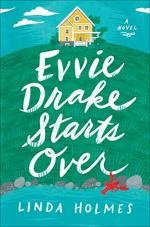 Linda Holmes
This Study Guide consists of approximately 29 pages of chapter summaries, quotes, character analysis, themes, and more - everything you need to sharpen your knowledge of Evvie Drake Starts Over.

This detailed literature summary also contains Quotes and a Free Quiz on Evvie Drake Starts Over by Linda Holmes.

The following version of this book was used to create this study guide: Holmes, Linda. Evvie Drake Starts Over. Ballantine Books, 2019.

Evvie packed her car and prepared to leave her husband Tim, her high school sweetheart. He was an adored doctor in town, but was often cruel to her. Tim died in a car accident that night right before Evvie left. About a year later, Evvie struggled with a feeling of guilt about how she did not miss him. She connected with Andy, her best friend whom she met every Saturday for breakfast. She agreed to lease the apartment connected to her house to Dean, Andy’s childhood friend and a recently retired professional baseball player who had lost his ability to pitch. As Dean moved in, he made a deal with Evvie that they would not talk about baseball or Evvie’s late husband.

Over time, Evvie and Dean grew to be close friends. Evvie noticed how Dean still longed to be a pitcher. She admitted to him how unhappy she had been in her marriage, which she had always kept a secret. They began to spend time chatting every day. They met with Andy and their families for Thanksgiving dinner. Evvie got upset when her father toasted to how proud he was of her for surviving the past year alone. Dean suggested that she should come clean to her father and Andy about how bad her marriage had been. He called off their deal about not talking about Tim or baseball. Then he kissed her on the forehead.

Evvie found Dean practicing pitching one night at 2 a.m. She desperately wanted to help him. On a whim, Dean drove to Boston with Evvie to pick up a vintage pinball machine from a friend’s friend that he had bought. He confessed to Evvie that he wanted to kiss her, but Evvie felt that she was not ready to be in a romantic relationship yet. Andy discovered that Evvie had planned on leaving Tim on the night of the accident. They did not meet for breakfast for the next few Saturdays. After a few weeks, Evvie met Andy and his girlfriend Monica for Saturday breakfast. Dean began teaching Evvie how to pitch. Dean pitched for the local Claws charity game. They kissed right before the game. Dean pitched well and felt hopeful for his future. He took Evvie out on a date the following week at a hotel restaurant. They had an enjoyable date, but Evvie wanted to keep their relationship a secret.

Evvie and Andy fell into a huge confrontation at dinner one night and stopped speaking to each other. Dean met a pitching coach and Evvie felt optimistic about Dean’s prospects of returning to professional baseball. However, his performance was consistently poor. He decided that he was quitting. He argued with Evvie and then moved out at the end of the summer. On her own, Evvie had a breakdown after dropping everything in her kitchen. She called Andy and finally apologized to him. She began working on herself, going to therapy, getting a dog, and moving to a new house. In the end, Dean visited her and wanted to get back together with her. They attended Andy and Monica’s wedding together.

More summaries and resources for teaching or studying Evvie Drake Starts Over.