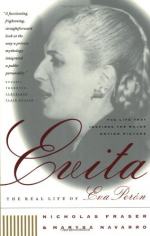 Nicholas Fraser
This Study Guide consists of approximately 24 pages of chapter summaries, quotes, character analysis, themes, and more - everything you need to sharpen your knowledge of Evita.

This detailed literature summary also contains Topics for Discussion and a Free Quiz on Evita: The Real Life of Eva Peron by Nicholas Fraser.

Evita: The Real Life of Eva Peron is a short biography of one of the most important political figures in recent Latin American history who has been transformed into a cultural symbol through popular musicals and movies over the last several decades. The purpose of the biography is to separate the myth of Evita from the reality. While the authors give credit to Evita's genuine accomplishments, they are careful to expose her real humanity, failures and eccentricities rather than treating her as a romantic heroine of the people, as many regard her in Argentina.

Eva Duarte was born one of five children who were the offspring of a relationship between her father, Juan Duarte and her mother, Doña Juana, who served as his mistress. Duarte had several other children with his wife and left Evita's family penniless. She grew up in modest poverty until her older siblings were old enough to work regularly. While Evita seems to have led a relatively unremarkable childhood, she always had dreams of becoming an actress, which led her to move from her hometown of Junín to Buenos Aires. She started from literally nothing to build an acting career. Evita's career was mildly successful, as she landed a handful of movie roles and leading roles in radio soap operas.

It was not until Evita met Juan Peron that she began her rise to her present iconic status. Peron was a Colonel in the Argentine military when they met and head of the Department of Labor. Unlike the corrupt conservative government he served under, Peron tried to organize the working classes into unions and Evita became involved in the organization. When a successful military coup brought Peron to power, Evita was still under thirty and had blossomed into a beautiful young woman who, while naïve, had a powerful presence and a strong personality.

During Peron's rule, Evita learned more about politics. While she always promoted absolute obedience to Peron, she fought for the poor and marginalized in Argentine society, frequently responding to direct requests from the poor in person. Through her work with the working classes, her reputation quickly grew. While many in the Argentina elite came to despise her, the people grew to adore her. When she created her Foundation for the poor, she became enormously popular. She gradually improved her speech-making ability and began to inspire increasing devotion. When she became sick with uterine cancer, the people mourned for her and her speeches became increasingly impassioned, spiritual and apocalyptic. When she died, the entire country entered a period of mourning.

Evita's history does not end with her death, however. Her body was heavily embalmed and placed on public display until Peron was overthrown and exiled. It was then moved around for years as she became a symbol of the lost era of Peronism to both its enemies and proponents. The Peronist guerillas who sprung up in later decades used her as a symbol of their political agenda. When Peronism died back, Evita began to grow into a pop culture figure due to popular media. Evita: The Real Life of Eva Person, explains the history of these events in detail, making careful effort to separate the true and the false and to carve a middle ground between the ideologies of her supporters and detractors.