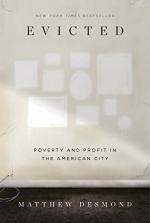 Matthew Desmond
This Study Guide consists of approximately 50 pages of chapter summaries, quotes, character analysis, themes, and more - everything you need to sharpen your knowledge of Evicted.

The following version of this book was used to create this study guide: Desmond. Matthew. Evicted: Poverty and Profit in the American City. Crown, 2016.

Evicted: Poverty and Profit in the American City by Matthew Desmond is a work of nonfiction that profiles landlords and tenants in Milwaukee, Wisconsin. All of the tenants portrayed lived in considerable poverty and faced a near constant threat of eviction. Their landlords, by comparison, achieved significant wealth by renting homes to poor residents. One of the primary individuals profiled is Sherrena, who, with her husband Quentin, owned and managed dozens of rental properties in the city’s predominantly black North Side. Sherrena was extremely industrious, spending much of her time driving between properties to collect rent, show properties to prospective tenants and address any issues that arose.While many landlords were fearful of renting to poor residents in these neighborhoods, Sherrena knew that it could be extremely profitable, particularly given that she was willing to forgo necessary but costly maintenance to her properties, when their occupants missed rent payments. Tobin, the other landlord profiled, followed a similar business model. He owned a trailer park on the city’s mostly white South Side. The park was plagued by rampant drug use and its residents had few prospects for improving their situations. Given the poor condition and reputation of his park, Tobin was nearly forced by the city to evict all of his tenants and sell the property.

The tenants profiled are broadly divided into black residents, who rented from Sherrena, and white residents, who rented from Tobin. They have a variety of backgrounds and life situations. Arleen was a single mother who lived with her two young sons and, often, relative strangers with whom she shared housing to save money. Crystal, who lived with Arleen for a time, was a young, single woman with significant mental health issues. Sherrena also rented to Lamar, a middle aged double-amputee with two sons, and Doreen, the matriarch of an extended family with ten members living together. Tobin’s tenants included Scott, a former nurse who had become addicted to heroin. All of the tenants shared the common experience of having been evicted from their homes, usually for failing to pay rent. This set of a series of moves and events in which they were forced to live with others, accept substandard housing, or live in homeless shelters.

Desmond extensively chronicles these experiences, particularly noting the effects eviction has on other areas of an individual’s life and the ways in which social support systems are dramatically inadequate. Overall, he argues that the amount of evictions in Milwaukee and the country as a whole amount to a crisis. He argues forcefully that the country has a moral imperative to address this problem and proposes potential solutions.

More summaries and resources for teaching or studying Evicted.