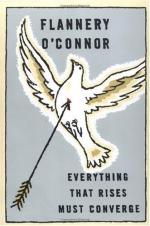 Everything That Rises Must Converge Summary & Study Guide

Flannery O'Connor
This Study Guide consists of approximately 23 pages of chapter summaries, quotes, character analysis, themes, and more - everything you need to sharpen your knowledge of Everything That Rises Must Converge.

Everything That Rises Must Converge Summary & Study Guide Description

Everything That Rises Must Converge Summary & Study Guide includes comprehensive information and analysis to help you understand the book. This study guide contains the following sections:

This detailed literature summary also contains Topics for Discussion on Everything That Rises Must Converge by Flannery O'Connor.

Because this was O’Connor’s last work, she considered it the culmination of all the themes and elements she had written about thus far. What is striking about all of O’Connor’s stories is her use of setting. O’Connor uses the South as a means of supplying motivation; rather than having the setting be only a place where the action takes place, the South allowed O’Connor to create characters and situations that were extremely real and lifelike. Because the South is steeped in historical drama, many different people hold deep discrimination toward others. The presence of religion created a strong sense of perfection and pleasantries; however, these covered up hostile feelings for anyone who was different from the norm. Because she lived many of her years in Georgia, O’Connor was able to take these feelings she witnessed during her childhood and translate them onto the page.

Because the main characters all have personality and moral defects, O’Connor famously uses her “grotesque” sense of justice in order to teach a lesson. Like a parable, she wants to show her readers how these problems don’t pan out well. Most of the main characters all suffer from the death of either themselves or a loved one. They live their lives in self-satisfaction for so long that they don’t see the error of their ways before it is too late. Heart attacks, strokes, even being killed by a bull’s horn are all forms of justice in O’Connor’s eyes. It may seem extreme, but O’Connor wants to make a point by not allowing many of her main characters to justify their actions and feelings.

For instance, Sheppard from “The Lame Shall Enter First” and Thomas in “The Comforts of Home” are both two characters that live in self-satisfaction and follow their own morality. Sheppard believes he is doing amazing work in the world, but he is only giving himself the glory. But when he finally realizes that his smugness is hurting his son, his son had killed himself. Thomas sees Star is an embarrassment to his family, but he struggles to find the strength to fix the situation. Yet when he tries to shoot her, he accidentally shoots his mother. Unfortunately, his mother was the person he was trying to protect from Star. It is situations like these which create complex, and sometimes intense, forms of justice for the characters.

O’Connor’s stories fall into the southern gothic genre along with others like Tennessee Williams and William Faulkner. Characteristics of this genre are the southern setting, realistic southern dialogue, strong religious presence, and a sense of the monstrous. Characters are typified by their judgmental and hypocritical personalities. The judgment these characters receive are often painful, agonizing, and over-the-top. Another characteristic of the southern gothic genre is the occurrence of family. Each of the stories in Everything That Rises Must Converge shows family is important in the South. However, the family dynamic in these stories is extremely dysfunctional. Mrs. May in “Greenleaf” thinks her two sons are failures; they haven’t been able to become successes, so they mooch off her and her farm. Sheppard in “The Lame Shall Enter First” can’t see his son is suffering from his wife’s death. Instead, he thinks his ten-year-old son should be an adult and forget about his sadness.

More summaries and resources for teaching or studying Everything That Rises Must Converge.

Everything That Rises Must Converge from BookRags. (c)2022 BookRags, Inc. All rights reserved.