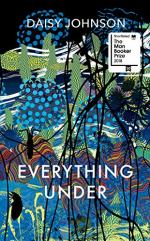 Everything Under Summary & Study Guide

Daisy Johnson
This Study Guide consists of approximately 41 pages of chapter summaries, quotes, character analysis, themes, and more - everything you need to sharpen your knowledge of Everything Under.

Everything Under Summary & Study Guide Description

Everything Under Summary & Study Guide includes comprehensive information and analysis to help you understand the book. This study guide contains the following sections:

This detailed literature summary also contains Quotes and a Free Quiz on Everything Under by Daisy Johnson.

The following version of this book was used to create the guide: Johnson, Daisy. Everything Under. Graywolf Press, 2018.

Johnson's contemporary retelling of the Oedipus myth follows the narrative of Gretel as she attempts to relocate her mother, Sarah, 16 years after her disappearance. Though Gretel has attempted to bury her memories of her childhood, Gretel continues to call hospitals and morgues every few months in pursuit of Sarah's whereabouts. When a body resembling Sarah's turns up at a morgue, Gretel renews her search.

After searching various locations, including the stables where they once lived, Gretel decides if she can contact her childhood companion Marcus, he may be able to lead her to her mother. Her online research proves futile until she finds a couple, Roger and Laura, who she believes to be Marcus's parents.

At Gretel's behest, Roger and Laura reveal that Marcus was in fact their adopted child. When she lived with them, however, she was a young girl, known as Margot. After their neighbor and family friend, Fiona, tells Marcus that he will kill his father and have sex with his mother and should leave his home, Marcus disappears. Roger and Laura never see him again. While attempting to pry the details of Marcus's disappearance from Fiona, Gretel receives an email from her mother saying that she is at the river.

When Gretel returns to the River Isis she is reunited with Sarah. After staying on their old houseboat for some time, Gretel brings Sarah back to her cottage. In the months leading towards Sarah's mental decline, Gretel extracts the truth of Marcus's story and Sarah's dark past.

Through a series of intertwining sections that overlap the events of the past and present, the narrative reveals that Marcus was Sarah's first child with a man named Charlie. Terrified by the implications of motherhood, Sarah abandons the child in a trash bin and leaves Charlie. This is the baby that Roger and Laura find, raise, and call Margot.

After leaving Roger and Laura, Margot lives along the river, eventually transitioning into a boy and calling herself Marcus. Afraid of the creature the fishermen along the shore call the canal thief, Marcus accepts Charlie's offer to stay with him on his boat. One night, Marcus becomes overwhelmed by the feeling that Charlie is being attacked by the canal thief, rushes into the boat, and mistakenly murders Charlie. After dumping his body into the river, Marcus flees the scene of his crime. Shortly thereafter, he encounters Gretel and Sarah, who welcome them into their home along the river. He stays with them for a month on their boat and longs to be a part of their family. One night while the three are hunting the Bonak, Marcus wakes from a nightmare involving Fiona's premonition. After Sarah asks him into her bed in an attempt to comfort him, the two have sex, neither aware of their familial relation. Shortly afterwards, while checking the Bonak trap Marcus drowns in the river.

When Sarah reveals these truths to Gretel, she tells her daughter now she wants to forget. The memories, however, prove too painful and Sarah hangs herself outside the cottage. By the end of the novel, Gretel realizes she needs to move on, and cannot continue to shape her identity around her mother's.

More summaries and resources for teaching or studying Everything Under.

Everything Under from BookRags. (c)2022 BookRags, Inc. All rights reserved.