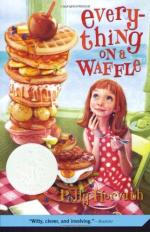 Everything on a Waffle Summary & Study Guide

Polly Horvath
This Study Guide consists of approximately 38 pages of chapter summaries, quotes, character analysis, themes, and more - everything you need to sharpen your knowledge of Everything on a Waffle.

Everything on a Waffle Summary & Study Guide Description

Everything on a Waffle Summary & Study Guide includes comprehensive information and analysis to help you understand the book. This study guide contains the following sections:

This detailed literature summary also contains Topics for Discussion and a Free Quiz on Everything on a Waffle by Polly Horvath.

This novel for young adults is the story of an eventful year in the life of eleven-year-old Primrose Squarp, who's forced to cope with the apparent loss of her seafaring parents after they go missing in a storm. As Primrose struggles to convince others that her belief that they're not dead is valid, she also struggles with interfering guidance counselors, a distracted uncle, and a tendency towards self-injury. In addition to questions about the nature and value of belief, the narrative also explores themes concerned with the importance of self-identity and the value of travel.

The novel begins with Primrose's physical description of herself and commentary on her situation - how her parents separately disappeared during a storm at sea, and how she stayed for a while with the elderly, absent-minded Miss Perfidy. She also describes how she remained convinced, in spite of what almost everyone in her small home town of Coal Harbor thought, that her parents were not dead, but were instead simply missing. The school guidance counselor, the aristocratic Miss Honeycut, intervenes with the town council to move Primrose out of Miss Perfidy's and in with her only known living relative, her Uncle Jack, now working for the navy on the east coast but transferred to the west coast (where Primrose lives) in order to take care of her.

Although Primrose moves most of her things into the home she now shares with Uncle Jack, she leaves her sweaters behind at Miss Perfidy's, where all the mothballs used by Miss Perfidy will, Primrose believes, keep them safe from moths. Meanwhile, Primrose adjusts to a life without her parents, taking refuge from both the taunts and the sympathy of her classmates by spending time with Miss Bowzer, the eccentric owner/head chef of a local restaurant who serves everything from eggs to steak and lasagna on a waffle.

Over the next several weeks, as Miss Honeycut makes it increasingly clear that she is romantically interested in Uncle Jack, and as Primrose continues her nightly, ocean-side vigil for her parents, Primrose has a series of accidents. When she is hit by a truck, one of her little toes is cut off. Then she gets the tip of her finger caught in a fishing net, and it too comes off. Finally, she accidentally singes the hair off a guinea pig entrusted to her care. Miss Honeycut sees all these incidents as a sign that Primrose isn't being appropriately cared for at home, and has her moved (by Child and Family Services) into a foster home, where she meets the friendly and supportive Evie and Bert.

One night Evie and Bert, who can see that Primrose is upset and homesick, take her into town for dinner at Miss Bowzer's restaurant, where they meet Uncle Jack (who has been fighting the decision by Child and Family Services). Their meal is interrupted by cries of fire - the brand new townhouse complex down the street, in which Uncle Jack is an investor, is ablaze. Jack, a volunteer firefighter, rushes out, followed by the others, who watch as the building burns and Jack rescues Miss Honeycut who, on Jack's advice, had purchased a unit in the complex. As Jack recovers in hospital from injuries he suffered while fighting the fire, rumors begin to surface that suggest he cut corners in the construction of the complex, which is why the fire started. Meanwhile, Primrose continues to stay with Evie and Bert, taking comfort from them when Miss Perfidy (who had absent-mindedly mislaid Primrose's sweaters) suddenly passes away.

A short while after Jack is released from hospital, he, Primrose, Evie and Bert are all walking along the beach when suddenly Primrose's dog starts running madly towards an arriving boat. Primrose, the others, and the entire community are shocked to discover that among the passengers on the boat are Primrose's parents, picked up by a passing ship after being stranded on an isolated island. As the family is reunited, Primrose draws the narrative to a close by revealing that shortly after her parents returned, Miss Honeycut returned to her home in England, and also commenting (in a now more adult narrative voice) that she was, and is, happy to spend the rest of her life in Coal Harbor.

More summaries and resources for teaching or studying Everything on a Waffle.

Everything on a Waffle from BookRags. (c)2022 BookRags, Inc. All rights reserved.