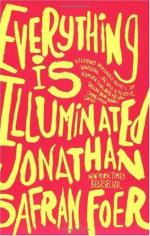 Everything Is Illuminated: A Novel Summary & Study Guide

Jonathan Safran Foer
This Study Guide consists of approximately 37 pages of chapter summaries, quotes, character analysis, themes, and more - everything you need to sharpen your knowledge of Everything Is Illuminated.

Everything Is Illuminated: A Novel Summary & Study Guide Description

Everything Is Illuminated: A Novel Summary & Study Guide includes comprehensive information and analysis to help you understand the book. This study guide contains the following sections:

This detailed literature summary also contains Topics for Discussion and a Free Quiz on Everything Is Illuminated: A Novel by Jonathan Safran Foer.

Everything is Illuminated is a novel by Jonathan Safran Foer. The novel tells how Jonathan traveled to the Ukraine in order to find the woman whose family helped save his grandfather during the war. Jonathan does not find this woman, but he learns more about his own history and a war that up to this point was nothing more than an abstract notion. Jonathan also meets Alex, who learns more about his own family history than he ever expected to. Everything is Illuminated is a novel of self discovery that will both entertain and illuminate, as Alex might say, readers of all ages.

Alex is a typical young man, interested in girls, cars, and America. Alex lives in the Ukraine. Alex's father is a travel agent who has a client coming from America who needs a translator and a driver. Since Alex did well in his English class at University, his father hires him to be the translator for the American while he hires his own father to drive even though Alex's grandfather has claimed to be blind since the death of his wife. Alex and his father pick up Jonathan, the American, at the train station and drive him to Lutsk, where they take a hotel room for the night before beginning their search the next day for Trachimbrod. Trachimbrod is where Jonathan's grandfather grew up.

Jonathan's great-great-great-great-grandmother was found one day after a wagon crashes into the Brod River. The Rabbi of the shtetl where this accident took place decides to give the child to a local man to raise. The man tells the girl, Brod, stories about her birth, making up a mother who died in childbirth. The woman comes to believe these stories so much that she grieves for the loss of a woman she never knew. Brod is never told the truth about her birth until the day she comes home to find her father dead. Brod is so heartbroken by this news that she asks a young man she has just met to end the life of the man who told her the truth.

Brod marries the boy she met the night her father died. They have three years of marital bliss. However, this comes to an end when Brod's husband, The Kolker, is injured in an accident at the flour mill. The Kolker survives, but his personality is altered. The Kolker becomes violent, often beating Brod. Brod remains by his side, however, giving birth to three sons, the last of whom is the great-great-grandfather of Safran, Jonathan's grandfather. Safran also grew up in Trachimbrod, living a life not unlike Brod's. Safran has many lovers in his short life, eventually marrying a young woman he did not meet until six months before the wedding. On the day the Nazis come, Safran's wife is due to give birth to their first child.

Lista, the woman Alex found, takes Alex, Jonathan, and Grandfather to the place where Trachimbrod once stood. Lista tells them how the Nazis bombed the shtetl and then came to kill the survivors. Lista describes how the men were forced to spit on the Torah or watch their families die. Lista describes the shooting of her sister and how her sister returned to collect the remains of the people of Trachimbrod, to keep it until someone comes to ask for it. Lista gives Jonathan a box that is labeled "In Case." That night, together in the hotel bar, Alex, Jonathan, and Grandfather look through the box. Inside, Grandfather pulls out a picture of himself, his wife, and his best friend, Hershel. This picture prompts Grandfather to tell Jonathan and Alex about his life in the village Kolki and how his actions led to the death of his best friend.

Alex and Jonathan have been corresponding regarding their joint attempts to write about their search for the woman who saved Safran. Alex becomes frustrated with Jonathan's use of poetic license, angry that Jonathan chooses not to tell the truth or to change the truth into something happier, less tragic than reality. In the end, Alex stops corresponding with Jonathan. Jonathan later learns that Alex threw his abusive father out of the house, only to discover later the same night that his grandfather has committed suicide to protect him from the past.

More summaries and resources for teaching or studying Everything Is Illuminated: A Novel.

Everything Is Illuminated: A Novel from BookRags. (c)2022 BookRags, Inc. All rights reserved.