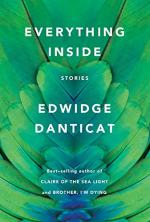 Plot Summary
+Chapters Summary and Analysis
“Dosas”
“In the Old Days” and “The Port-au-Prince Marriage Special”
“The Gift” and “Hot-Air Balloons”
“Sunrise, Sunset” and “Without Inspection”
“Seven Stories”
Free Quiz
Characters
Symbols and Symbolism
Settings
Themes and Motifs
Styles
Quotes
Order our Everything Inside Study Guide

Everything Inside Summary & Study Guide

Edwidge Danticat
This Study Guide consists of approximately 35 pages of chapter summaries, quotes, character analysis, themes, and more - everything you need to sharpen your knowledge of Everything Inside.

Everything Inside Summary & Study Guide Description

Everything Inside Summary & Study Guide includes comprehensive information and analysis to help you understand the book. This study guide contains the following sections:

This detailed literature summary also contains Quotes and a Free Quiz on Everything Inside by Edwidge Danticat.

The following version of this book was used to create this study guide: Danticat, Edwidge. Everything Inside. New York: Alfred A. Knopf, 2019.

Everything Inside is a collection of eight short stories by author Edwidge Danticat.

“Dosas” takes place in Miami and follows a Haitian immigrant named Elsie. She works as a caretaker for sick and elderly people. Her husband Blaise recently left her for a woman named Olivia. One day, Blaise contacts Elsie and says that Olivia returned to Haiti and was kidnapped. Elsie gives Blaise $5,000 to help pay the ransom. However, she later returns that Blaise actually scammed her. Blaise and Olivia returned to Haiti with money that they scammed from Elsie and other people.

“The Port-au-Prince Marriage Special” is narrated by a Haitian woman who owns and operates a hotel in Port-au-Prince, Haiti. One day, Mélisande (a woman who works for the narrator) is diagnosed with AIDS. The narrator decides to pay for Mélisande’s medical treatment. The narrator eventually learns that Mélisande likely contracted the disease after being seduced by a guest staying at the hotel.

“The Gift” follows a woman named Anika, who used to have an affair with a married man named Thomas. Thomas’ wife and child died in the 2010 Haiti earthquake. Thomas then ended his relationship with Anika because he felt a sense of guilt. Anika lives in Miami and persuades Thomas to visit her there so that she can talk to him one more time.

“Hot-Air Balloons” is narrated by a young woman who is the daughter of Haitian immigrants. She is a freshman in college. Her roommate Neah (who is also the daughter of Haitian immigrants) drops out of school to go to Haiti; Neah begins working for a non-profit organization that helps women in need. At the request of Neah’s father, the narrator goes to Haiti to try to persuade Neah to return to school.

“Sunrise, Sunset” takes place in Miami, Florida. Jeanne is in her early thirties and is the daughter of Haitian immigrants. Jeanne has recently given birth for the first time. Due in part to postpartum depression, Jeanne suddenly becomes averse to the idea of being a mother. Jeanne’s own mother, Carole, values family highly, and she is saddened by Jeanne’s hesitation. Carole is also saddened by the fact that she (Carole) is beginning to develop dementia.

“Without Inspection” takes place in Miami, Florida. Arnold is an immigrant from Haiti. In Miami, he meets and falls in love with a Haitian immigrant named Darline. He moves in with Darline and becomes a surrogate father to her son Paris. One day, Arnold falls off a building while working a construction job. His last thoughts before he dies are of Darline and Paris.

“Seven Stories” follows an American woman named Kim. When Kim was seven years old, she met a young girl named Callie. Callie was the daughter of the prime minister of a Caribbean country. (The story never names the country.) Callie’s father had been recently assassinated. Years later, Callie marries a man who becomes the country’s newest prime minister. Callie then invites Kim to visit the country.

More summaries and resources for teaching or studying Everything Inside.

Everything Inside from BookRags. (c)2022 BookRags, Inc. All rights reserved.