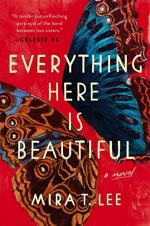 Everything Here Is Beautiful Summary & Study Guide includes comprehensive information and analysis to help you understand the book. This study guide contains the following sections:

This detailed literature summary also contains Quotes and a Free Quiz on Everything Here Is Beautiful by Mira T. Lee.

The following version of this book was used to create the guide: Lee, Mira T. Everything Here is Beautiful. Penguin Random House LLC, 2019.

As young girls, Miranda and Lucia share a deep and meaningful bond. Charged with her sister's care when their mother falls ill, Miranda struggles throughout the novel to reconcile her individual desires with her duty to Lucia's care and protection. Because Lucia has been diagnosed with schizophrenia and experiences frequent psychotic episodes, Miranda believes she is the only person who can maintain balance and consistency for her sister.

Three years after her last episode, Lucia meets and marries a kindly Russian Jew, Yonah. Though Miranda does not approve of their relationship, the couple is genuinely happy and in love. They live peacefully for a time in a small apartment adjacent to Yonah's health food store. Miranda feels some peace during this time and begins a relationship with a Swiss urologist, Stefan. However, Lucia soon experiences another episode, becoming increasingly deranged and irrational. She eventually leaves Yonah, insisting the serpents in her mind told her she must have a baby, which Yonah does not want.

She then meets Manny, a younger Ecuadorian, at the laundromat, and the two begin a serious and rapid relationship. Though Manny is enamored by Lucia, he is also fearful of her unpredictability and seeming unknowability. When she announces her pregnancy, Manny devotes himself to both Lucia and the baby, having always wanted a family. Shortly after Esperanza's birth, however, Lucia spirals into mania once more. She becomes incapable of caring for herself and Essy, and is hospitalized shortly thereafter. Manny assumes sole responsibility of Essy, desperate to keep her safe.

Hearing of her sister's hospitalization, Miranda rushes from her new home in Switzerland with Stefan back to New York to be with her. She inserts herself into the doctors' care and handling of her sister's medication. While in the ward, Lucia is frustrated and confused. She finally agrees to take the prescribed pills at the promise of getting out. She gradually improves, and the doctor's release her.

In the months following her release, Lucia works to maintain internal and external balance. She makes friends with a woman, Napi in her mother's group, and eventually secures a copywriting job. She finds joy in her daughter. Growing restless, she and Manny agree to move to Ecuador to be with his family and reinvent their life together.

Initially the move grants the family peace and rejuvenation. However Manny's family and their small living space gradually wears on Lucia. She finds a job writing in town, and lives three days a week away from the farm. Her anxiety and paranoia grow. She becomes desperate to leave Manny and be reunited with Yonah. She concocts a plan to take Essy with her to America under the pretenses she is visiting Miranda in Switzerland. When Miranda discovers her scheme, she rushes to Ecuador and forbids her. Lucia falls into a wild tantrum and loses all self control. In the weeks to come, Manny becomes increasingly fearful for all their safety. When he starts crushing Lucia's pills into her tea, Lucia grows achieves renewed balance. The years pass in relative peace.

However, after Lucia suffers a miscarriage, she spirals into despair once more. Finally she tells Manny she is going to visit Yonah in his final weeks of life. Once there, she informs Manny she will not be returning. She lives peacefully with Yonah until his death. Losing her true love plunges Lucia into inescapable grief, and she dies not long after.

By the end of the novel, Essy is grown and moves to New York for college. There she reconnects with Miranda who has also moved back to the city.

Everything Here Is Beautiful from BookRags. (c)2022 BookRags, Inc. All rights reserved.