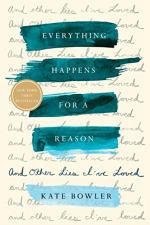 Everything Happens For a Reason Summary & Study Guide

Kate Bowler
This Study Guide consists of approximately 44 pages of chapter summaries, quotes, character analysis, themes, and more - everything you need to sharpen your knowledge of Everything Happens For a Reason.

Everything Happens For a Reason Summary & Study Guide Description

Everything Happens For a Reason Summary & Study Guide includes comprehensive information and analysis to help you understand the book. This study guide contains the following sections:

This detailed literature summary also contains Topics for Discussion on Everything Happens For a Reason by Kate Bowler.

The following version of this book was used to create this guide:

Kate Bowler is a professor and religious scholar who specializes in the prosperity gospel, a branch of Christianity that believes that God rewards the faithful and punishes the sinful. Thus, life’s tragedies can be easily explained and individuals have control over their lives. After being diagnosed with Stage IV colon cancer, Kate realizes how she had inadvertently bought into these tenets, which are not just reflected in the prosperity gospel, but also in the cultural ethos of North America in general which believes, according to the American Dream, that hard work, positivity, and good behavior will be justly rewarded.

After diagnosis, Kate is rushed into surgery and is not expected to live out the year. She is forced to contemplate the reality of dying and cannot imagine leaving behind her husband and baby son. She remembers past illnesses when weakness in her arms made it difficult for her to use them for a long period in her late twenties. As she struggled to navigate the medical system and find a diagnosis, believers in the prosperity gospel held up her illness as an object lesson, proof that she must have committed some unknown sin to have been punished with this illness. At the same time, Kate suffers from infertility and a miscarriage.

Finally, Kate finds a physiotherapist who can heal her arms. Waves of good fortune follow her healing as she lands her dream job, gets a book deal, and has a baby. Now she is held up as an example of how God rains blessings down upon the faithful. However, just a year later, she receives her terminal cancer diagnosis and she is forced to question not just her personal philosophies, but many of the cultural beliefs that surround her.

Recovering from surgery, Kate tries to prepare for her death psychologically and practically. She is filled with love for her family and friends and wants them to live happily, unburdened, and free, regardless of what happens to her. At the same time, she pushes herself to control and direct her healing, determined not to surrender to death. She knows that her previous arm condition and infertility should have taught her that she cannot control life, but nevertheless, she tries.

Kate then learns that she is part of just three percent of people with her condition who are eligible for experimental treatments. When her insurance company refuses to pay for the treatment, friends in high places pull strings to get it covered. Kate is then tested and accepted into a clinical trial in Atlanta which combines her chemotherapy with special immunotherapy.

Kate then begins writing about the challenging of living with dying “in a world where everything happens for a reason” (106). She publishes an article in the New York Times which prompts countless people to write to her to share advice and their experiences. While many people are sympathetic, understanding, and supportive, most do not know how to deal with the realities of death sympathetically. People tell her that their problems are worse, that death is relative, that she should accept God’s plan for her, or that cancer is a just punishment for her sins. People are consumed with finding a logic or a reason behind the seemingly random cruelty of tragedy. However, what speaks to Kate the most are the people who write to her about love. Love is the overwhelming emotion she felt after her diagnosis when the reality of death threw the love and support of her family and friends into sharp relief.

As time passes and Kate continues treatment, she finds it hard to accept how people ignore the realities of death, even during Lent and Good Friday which are supposed to be times in the Christian calendar when people contemplate it. Kate longs for solidarity in facing death which she is now forced to do every day. She finds comfort and support in her friend Ray, who is a pediatric oncologist and can understand what she is going through. She also finds further emotional support in her friend Blair who is also living with an uncertain future because she knows she may be predisposed to getting Alzheimer’s.

Kate is now in a cycle of treatment in which the clinical trial extends her treatment—and her life—in two-month increments provided that the immunotherapy drugs continue to work on her tumors. Chemotherapy appears to have reached the limits of what it can do for her and Kate has to figure out if she can let go of that part of her treatment plan. She is trying to learn to live in the present and she lives between life and death. She knows that there is no cure and that the most she can hope for is a manageable illness. Kate talks to friends and doctors about how to learn to live in the present, which she calls Ordinary Time. They advise her to continue to put one foot in front of the other and to avoid skipping to the end. Slowly, she learns to make small plans, to live in Ordinary Time, and to leave a trail of crumbs for her husband and son so that, if she dies, they will be surrounded by love. As Kate wakes up in the morning to make breakfast for her family, she knows she will die one day, but not today.

More summaries and resources for teaching or studying Everything Happens For a Reason.

Everything Happens For a Reason from BookRags. (c)2022 BookRags, Inc. All rights reserved.