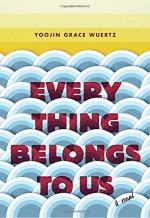 Everything Belongs to Us Summary & Study Guide

Yoojin Grace Wuertz
This Study Guide consists of approximately 85 pages of chapter summaries, quotes, character analysis, themes, and more - everything you need to sharpen your knowledge of Everything Belongs to Us.

Everything Belongs to Us Summary & Study Guide Description

Everything Belongs to Us Summary & Study Guide includes comprehensive information and analysis to help you understand the book. This study guide contains the following sections:

This detailed literature summary also contains Quotes and a Free Quiz on Everything Belongs to Us by Yoojin Grace Wuertz.

The following version of this book was used to create this study guide: Wuertz, Yoojin Grace. Everything Belongs To Us. Random House, 2017.

The novel opens on a strike by the female laborers of the Mun-A textile factory, an action looked down upon by the South Korean government in 1978. Observing the strike are two college students from the prestigious Seoul National University. Juno is the elder and mentor, part of the elite social group called the Circle, which many view as a ticket to success. Sunam is his younger mentee. They watch police officers brutally arrest the women, who shed their shirts and bare their chests in defiance.

The police arrest a young student activist named Jisun, who they quickly release after learning her father is Ahn Kiyu, an influential business leader. Jisun returns to her father’s house. She has previously been staying at factory housing and working at the Urban Industrial Mission, an American missionary organization that organizes and educates labor activists. The UIM is where she meets Peter, an American activist with whom she falls in love, but who admonishes Jisun’s actions at the strike: her nudity and her release.

Jisun meets her childhood friend, Namin, in Miari, a poor section of Seoul. Namin is studying at SNU to become a physician. She hopes to lift her family out of poverty. Her sister, Kyungmin, works at a factory. Jisun and Namin's differences cause them to bicker, but their shared understanding of loss bring them together. Jisun’s mother died when she was young. Jisun’s brother Hyun has cerebral palsy. Her parents sent him to the country to live with their grandparents.

Jisun hates that Namin is going out for the Circle, her brother Min’s social group, but Namin insists that membership will help her succeed in life since she was not born with as much privilege as Jisun. All three characters--Jisun, Namin, and Sunam--meet at a party for the Circle. Namin kisses Sunam and tells him the truth about her family and where she is from. They begin to date and she eventually tells him about her sister. Kyungmin has stopped living at home. Namin suspects she is working in Itaewon, an area synonymous with prostitution, where American GIs go to drink and purchase sex. Eventually Namin and Sunam visit Kyungmin in Itaewon, where she lives, pregnant by an absentee GI named Hal.

Meanwhile, Jisun makes a business deal with her father. If he allows her the next for years of her life to do as she pleases, she will do as he says for the succeeding for years. Ahn Kiyu agrees to her terms. Jisun immediately starts making inroads back within the activist community.

Jisun and Sunam become friends as Namin spends more and more time in the library. One night after a movie and a lot of drinking, they sleep with each other on the roof of a hotel. Jisun is upset about Peter. Sunam is seduced by Jisun’s sexual freedom, especially since Namin practices abstinence out of fear of a baby derailing her goals in life. Jisun and Sunam continue their affair. Ahn Kiyu approaches Sunam about his affair with his daughter. He uses Sunam's infidelity with Namin as leverage to ask him to keep an eye on his daughter. He wants Sunam to help Jisun avoid costly distractions. Ahn Kiyu eventually wants to leave his business to Jisun, not Min, who he describes as less serious, and more likely to sell the business. Ahn offers Sunam a large amount of money. He agrees.

Kyungmin shows up at the Kang house with an unnamed baby boy. She disappears again, leaving childcare responsibilities to Namin. The baby upends her studies and her life. She depends on a wily neighbor named Busan Mother for babysitting while she is in school or with Sunam. Busan Mother demands expensive beef as payment for her services, which Sunam pays for. Namin convinces herself that Jisun must be giving Sunam this money. Namin confronts Sunam about this arrangement with Jisun. Shocked and confused, Sunam accidentally admits to his affair with Jisun.

Peter shows up at Jisun’s house. He needs money to support some of the labor activists who have been arrested and face trial. Jisun agrees to give him her entire inheritance as long as he stays out of Seoul as it is increasingly dangerous for labor activists.

Namin attempts to give Kyungmin’s child up for adoption. After learning he is unlikely to be adopted because he is half-American, Namin keeps the baby. She goes to Jisun for financial help that she previously refused, but Jisun has given her money away.

In an epilogue, which glosses over the subsequent 30 years, we learn that Kyungmin’s baby died during a cold winter after getting sick. Namin graduated early and became the Minister of Health. She married an oncologist; they live with Hyun. Jisun studied in the USA and did not have plans to return to Seoul. Sunam lives in Hong Kong. He married, then separated from his wife, with whom he has a 15 year old son. He recalls the events and regrets of his past like a “brief weight dragging at his heels” (345).

More summaries and resources for teaching or studying Everything Belongs to Us.

Everything Belongs to Us from BookRags. (c)2022 BookRags, Inc. All rights reserved.