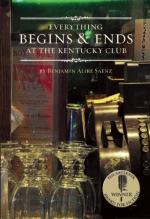 Everything Begins and Ends at the Kentucky Club Summary & Study Guide

Benjamin Alire Saenz
This Study Guide consists of approximately 41 pages of chapter summaries, quotes, character analysis, themes, and more - everything you need to sharpen your knowledge of Everything Begins and Ends at the Kentucky Club.

Everything Begins and Ends at the Kentucky Club Summary & Study Guide includes comprehensive information and analysis to help you understand the book. This study guide contains the following sections:

This detailed literature summary also contains Quotes and a Free Quiz on Everything Begins and Ends at the Kentucky Club by Benjamin Alire Saenz.

The following version of this book was used to create this guide: Sáenz, Benjamin Alire. Everything Begins and Ends at The Kentucky Club. El Paso: Cinco Puntos Press, 2012.

"He Has Gone to Be With the Women":

Juan Carlos, a middle-aged writer from El Paso, Texas, tells the story of his relationship with Javier, a driver from Juarez, Mexico. They are both of Hispanic origin but have come to understand their identities in different manners, the border between the two influencing how they see each other. Slowly, they become more intimate and reveal more about each other. Javier had to live with his aunt and uncle because his mother was a social worker in Juarez and always in danger. She was eventually murdered and buried in the desert. Javier's uncle is suffering from cancer and his death allows both of them to bond, deepening the relationship between Juan Carlos and Javier. Juan Carlos is concerned about Javier living in Juarez, as the city slowly deteriorates into chaos. They both come to terms with the fact that Juarez will always be an important part of Javier's life and that Juan Carlos will love him regardless of where they live.

Their idyllic life is struck by tragedy when Javier disappears one night, his neighbors in Juarez revealing that he was kidnapped by armed men. Juan Carlos looks for him everywhere, falling into a depression as he tries to get a sense of Javier in the things they shared. Eventually he finds that Javier was taken to the desert where his mother was buried, and the last memento left for Juan Carlos is the watch he was wearing when he died.

"The Art of Translation"

Nick, a young college student in 1985, narrates the emotional fallout after he is brutally assaulted by a group of white men while attending university in Albuquerque. They use a knife to carve the word "illegal" into his back. After the attack, he loses his sense of identity, trying to come to terms with the attack as he recovers while also attempting to piece together his life by translating words from English to Spanish, words that were familiar once but are no longer. Nick's family is concerned, as they are constantly harassed by reporters and hecklers trying to pry themselves into their home for interviews or derogatory comments. The strain on them is visible but Nick does not react, his silence compounding their worries.

Slowly, he begins to turn his life around, settling into a routine where he works at a restaurant. One night he visits a bar and leaves with an older woman, Sylvia. They have sex in her apartment in Juarez twice, where they argue over him not taking his shirt off. Nick leaves her and comes to terms with the changes in his life, especially the scars on his back and his eventual journey to claim a new identity in the aftermath of all that has happened.

Maximilian "Max" Gonzales tells the story of his childhood in Juarez, where he has to learn to deal with his mother as she loves him in her own unique way. There is always a roof over his head, clothes to wear, food on the table, but his relationship with his mother is not all that he would like it to be. She teaches him English and prioritizes his education, while also leaving him for days and spending a lot of time at home sinking in depression. As a result, Maximiliano spends a lot of time at other people's home, imagining himself in their families. Eventually he learns that she is a drug dealer but he does not respond to the information in any explicit manner, finding comfort in his friends, their families, and his drawings.

One day his mother takes him to El Paso and leaves him with his father, who he has never met before. His father enforces a regimented life on him, having him follow rules while also satisfying any financial needs. As Maximiliano grows and excels at school, his relationship with his father, tense at first, evolves into something more wholesome, as they are never openly affectionate but somehow find comfort in each other. Just like his mother, Maximiliano's father is also a drug dealer and addict, funding Max's education and eventual move to Georgetown University with the drug money. His father eventually dies from an overdose and Max comes to realize the true depth of his relationship with his father.

"Brother in Another Language"

After a failed attempt at suicide, Charlie tells the reader how he ended up in a therapist's office. While there, he slowly falls in love with David, the man his mother is paying to listen to him, while also revealing details of his life, including the perpetual hatred and indifference he had to face from his parents growing up, and the loss of his older brother, the only comfort he had growing up. Charlie's father passes away in a car accident, and Charlie violently ends his relationship with his mother, while being reminded again at the funeral of all the hate and anger the family had directed towards him.

A phone call from his therapist reveals that his father left him a large amount of money, a fortune that he does not wish to partake in. Being convinced by David, Charlie meets with his father's lawyer, Richard Fry, who tries to convince him to take the money that was left to him and his brother. Richard reveals his uneasiness at having been a part of Charlie's father's business and his relationship with Charlie's brother, whom he loved and supported financially after his exile from the family. Charlie's brother is revealed to have died in Buenos Aires after a dispute with his lover. Charlie, burdened by the loss of one of the few people who loved him, wanders about and ends up in a jail cell, unaware of how he got there but determined in a manner to never leave.

While driving through the rain on a highway, Neto reminisces about his last few months of high school and the summer after. During that time, he befriended Brian Stillman a local boy who had been part of the track team with him. As Neto roams aimlessly around the town, he encounters Brian and they have an honest exchange where Brian expresses his admiration for Neto and apologizes for his behavior. While at a riverside party, Neto overhears a couple having sex and learns that it is Brian and Jorge Ledesma, the son of the a farmer from Mexico who worked on Brian's farm. Neto leaves without confronting them and masturbates to the image of them that night.

Having received a large financial aid package from The University of New Mexico in Albuquerque, Neto decided to work two jobs over the summer to finance the remainder of his education. While driving one night, he encounters Brian Stillman on the highway, bloodied and bruised. He takes Brian home and cleans him up, offering a place to stay as he comes to terms with his father's brutal assault and his future. Brian and Neto drive around for a few days, getting closer but never in a sexual manner, despite Neto's desire. When Brian decides to leave, Neto gives him $600 and sees him off to Denver. Some time later, it is revealed that Brian lost his life in Vietnam and that he had fallen in love with Neto during their time together.

Conrad tells the story of his relationship with his sister, Carmen, and how their parents led her to her death. After the death of their parents, Conrad and Carmen are raised by their uncles and aunts, who try to control their lives in every manner possible. Carmen is the rebellious one and antagonizes her extended family deliberately. Both Conrad and Carmen try to come to terms with their parents and their volatile relationship, a mother who was depressed and indifferent, and a father who was an alcoholic. Conrad begins to attend college and immerse his life in his education and sex, the latter being the only thing satisfying for him and the only thing under his control.

Carmen slowly introduces him to drugs, first marijuana and then cocaine, revealing her own addictions and demons that were carried down to her from their mother. Conrad attempts to help her while also fighting his own addiction: sex. Carmen consistently reminds him of their similarities to their parents and their inability to escape from their fate. Carmen slowly spirals into a depression fueled by her heroin addiction, as she desperately attempt to "chase the dragon." After multiple attempts by Conrad to control her addiction, Carmen finally overdoses and dies, leaving Conrad to confront the loss of his sister and his inability to help her.

After he receives news about Tom's death, Michael recalls the uniqueness of their relationship, from how they met to the strange intimacy that developed between the two.

Michael, a high school counselor, and Tom, a criminal attorney begin a relationship. Despite Michael's uneasiness, they begin dating and Tom reveals a softer side to him that pleases Michael. Tom teases Michael about his choice of drink while also praising and encouraging him about his art. During his job, Michael sees Danny, a child who is being severely beaten by his father and attempts to provide an out for him. While Danny's father constantly follows him around even after he is relocated to a foster home, Michael, with the help of Tom, acquires an attorney and begins the process of sending Danny to Colorado to live with his aunt.

Tom comes to Michael one day severely agitated and reveals his fears and desires to keep Michael away from his business and the danger that accompanies it. Tom disappears, and for a while Michael stumbles around bars trying to find solace. In a newspaper clipping, he sees that Tom has been arrested for trying to fake his own death and he is relieved to hear that Tom is still alive. While sitting at the Kentucky Club, he imagines what Tom would say once he walked in and how he would respond.

More summaries and resources for teaching or studying Everything Begins and Ends at the Kentucky Club.

Everything Begins and Ends at the Kentucky Club from BookRags. (c)2022 BookRags, Inc. All rights reserved.