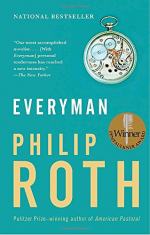 Philip Roth
This Study Guide consists of approximately 33 pages of chapter summaries, quotes, character analysis, themes, and more - everything you need to sharpen your knowledge of Everyman.

The following version of this book was used to create this guide: Roth, Philip. Everyman. Houghton Mifflin Company, 2006.

The novel opens at the funeral of the protagonist, whose name is never given in the novel. The protagonist’s various loved ones take turns speaking about him before he is buried. The narrative then transitions back to when the protagonist is nine years old. He lives in Newark with his Jewish parents and his older brother, Howie. His father runs a jewelry store. One day, the protagonist develops a hernia and is hospitalized for it. He is scheduled to undergo surgery to fix the hernia, and for the first time in his life, he fears the possibility of death. The narrative then transitions ahead to when the protagonist is in his mid-thirties. He works in advertising as a creative director and has divorced his first wife, Cecilia, with whom he had two sons, Randy and Lonny. He now is dating a woman named Phoebe, who will eventually become his second wife. He feels ill and is diagnosed with a burst appendix. As he recovers, he is visited in the hospital by Phoebe and by his brother Howie, who is now a successful currency trader.

The narrative then moves ahead to 1989, when the protagonist is in his mid-fifties. By this point, he has an adult daughter named Nancy, whose mother is Phoebe. However, he has apparently divorced Phoebe and married a third wife, whose name the narrative does not yet give. He is hospitalized for blockages in his coronary arteries, and he undergoes coronary bypass surgery. He hires a nurse named Maureen to take care of him in his home as he recovers, and he and Maureen have a sexual affair. The protagonist’s father dies a little late, and the protagonist is overwhelmed with a sense of loss as he watches his father’s coffin being buried. Years later, after the September 11th attacks, the protagonist retires and moves from New York City to live in a retirement community called Starfish Beach on the Jersey Shore. By this time, he appears to be single once again after three marriages. He soon undergoes further surgeries for congested arteries.

A the retirement community, the protagonist spends his free time pursuing his passion of painting, and he even organizes painting classes for the fellow retirees. A student in one of his classes is a woman of about his own age named Millicent. They become friends but not romantic partners. Millicent suffers from chronic pain and still suffers deep grief for her deceased husband. Millicent soon kills herself by overdosing on her pain medication, and the protagonist cancels the painting classes. By this point, the only other person in his life is his loyal daughter Nancy, who calls and visits regularly. His communications with his brother have become infrequent because he is jealous of Howie’s good health.

The narrative then transitions back to the protagonist’s life as a retiree. He grows tired of life at Starfish beach and wishes to move back to New York City. He receives a call from Nancy, who says that Phoebe has had a stroke. He then receives calls regarding former advertising colleagues of his who have either died or appear likely to die soon. The protagonist goes to New York to visit Phoebe in the hospital, and he calls his dying advertising colleagues to talk to them. The protagonist is soon diagnosed with further artery blockages and is scheduled for further surgery. The protagonist decides that he wants to speak to Howie and Nancy before his surgery, but he fails to do so. A few days before his surgery, he visits the graves of his parents. He sees a gravedigger in the cemetery and asks about the process of digging a grave. A few days later, the protagonist goes to his surgical appointment. He dies during the surgery.