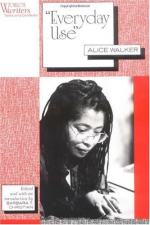 Alice Walker
This Study Guide consists of approximately 37 pages of chapter summaries, quotes, character analysis, themes, and more - everything you need to sharpen your knowledge of Everyday Use.

1971: The Supreme Court upholds busing students to various schools in order for them to achieve greater racial integration.

1995: Louis Farrakhan of the Nation of Islam leads the Million Man March in Washington, DC, as a show of solidarity and an opportunity for black men to publicly declare their support for family values.

More summaries and resources for teaching or studying Everyday Use.

Everyday Use from Gale. ©2005-2006 Thomson Gale, a part of the Thomson Corporation. All rights reserved.