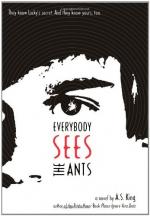 Everybody Sees the Ants Summary & Study Guide includes comprehensive information and analysis to help you understand the book. This study guide contains the following sections:

This detailed literature summary also contains Topics for Discussion on Everybody Sees the Ants by A.S. King.

"Everybody Sees the Ants" is a young adult novel by A. S. King which focuses around fifteen year-old Lucky Linderman's attempts to deal with a bully and his complicated family situation.

At the beginning of the novel, Lucky appears as an intelligent fifteen year-old teenager who has experienced years of torment from a bully named Nader McMillan. This bullying is physical and emotional, and affects Lucky heavily. At the same time, Lucky has to deal with his combative parents, Lori and Vic, whom he believes are cold and distant. Lucky is able to escape from reality in his dreams, where in the jungles of Vietnam, Lucky meets, befriends, and tries to help his soldier grandfather escape, thus fulfilling a promise to his grandmother to help his grandfather escape.

Lucky's mother brings the both of them to her brother Dave's house in Arizona, where they stay for three weeks. It is in Arizona that Lucky's life changes for the better. Dave helps Lucky lift weights and shape up, and gives him invaluable advice on how to deal with and handle bullies. Lucky also grows closer to his mother and comes to respect his pill-downing Aunt Jodi, because Dave is having multiple affairs.

Lucky also meets, befriends, and receives his first kiss from Ginny, a beautiful seventeen-year-old girl whose parents use her as a hair model to make money for a company that they run. Ginny runs to Lucky's arms after her mother beats her up for shaving off her hair.

Returning to Pennsylvania, Lucky and his parents all become a stronger family unit. Lori even stands up for her son by giving the final complaint that gets Nader fired from the community pool, and Lucky stands up for himself by confronting Nader, telling Nader that if he ever touches him again, he will call the police. Lucky, in one last dream, buries his grandfather, who has given him his wedding ring to give to Vic. Lucky wakes up with the ring in his hand, and the novel ends with Lucky about to divulge his dreams.

Everybody Sees the Ants from BookRags. (c)2022 BookRags, Inc. All rights reserved.