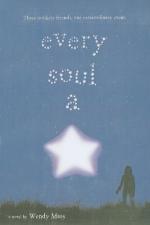 Every Soul a Star Setting & Symbolism

Wendy Mass
This Study Guide consists of approximately 32 pages of chapter summaries, quotes, character analysis, themes, and more - everything you need to sharpen your knowledge of Every Soul a Star.

This is the campground where people come to see the eclipse and the general setting of the book.

These are five different amusement-park-esque areas of the campground where campers can amuse themselves.

Team Exo hides in a shed the first night they try to take measurements in order to avoid a storm. They have a wonderful time there.

Jack spends a lot of time on the bus on the way to Moon Shadow.

The entire book is built around the solar eclipse that draws everyone to Moon Shadow.

Mr. Silver had intended to run his experiment at Moon Shadow but had to leave when his wife had a health care. He left them with Team Exo who used them to great effect.

This is an extra solar planet or a planet...

More summaries and resources for teaching or studying Every Soul a Star.

Every Soul a Star from BookRags. (c)2023 BookRags, Inc. All rights reserved.