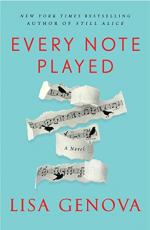 Lisa Genova
This Study Guide consists of approximately 82 pages of chapter summaries, quotes, character analysis, themes, and more - everything you need to sharpen your knowledge of Every Note Played.

This detailed literature summary also contains Quotes and a Free Quiz on Every Note Played by Lisa Genova.

Concert pianist Richard Evans has been diagnosed with ALS. His right hand is already losing dexterity. His ex-wife, Karina, attends a party for one of her piano students and hears about the diagnosis second-hand. A few days later, she visits Richard at his apartment unannounced, but he looks healthy. The couple trades barbed comments until Richard’s hands are unable to grip a bottle of wine. He throws the bottle opener and accuses Karina of gloating over him; she smashes the bottle and walks out.

Karina visits their daughter Grace at university and swears she will never have to give up control of her life the way Karina did. Richard loses use of his right arm and knows the left is next. His nurse, Kathy, tests his reflexes. Richard realizes that he may never hug someone again, and it has already been months since he released his last girlfriend, Maxine, from caring for him. He cries and Kathy hugs him for as long as he needs.

Karina goes on her weekly walk with her friend Elise, who is her one connection to the jazz scene she once loved since she left New York to support Richard’s career. Elise reveals that Richard’s arms are now paralyzed. Karina visits him again and he confides his financial difficulty: he must move apartments before he needs a wheelchair, and his medical bills are expensive. Karina urges Richard to tell Grace about his ALS, but he does not want to.

Richard’s favorite carer is Bill; Bill gives Richard dignity when modesty is impossible. When Richard’s meds give him constipation, Bill puts a laxative in Richard’s morning smoothie. Richard insists on going for a walk, but he is quickly exhausted. He collapses on a park bench but soon feels the laxative kick in. He makes it back to his building, but none of his neighbors are home to let him in. In his panic, his voice slurs, and his phone mistakenly calls Karina. Karina rushes to him. She cleans him while he cries with humiliation. After the tension of the moment, they laugh together, but Karina points out that Richard cannot go on like this. Against her better judgment, she tells him to move back in with her.

Karina cares for Richard’s basic needs but otherwise avoids him. He writes unsent letters to his father and wonders if his ALS is a chance to heal the rift with Karina. Grace finds out about Richard’s ALS from a friend and is furious when she visits for winter break. On Christmas Eve, Richard convinces Karina to feed him a bit of cake, and they share a peaceful moment—until Richard starts choking. He now needs a BiPAP machine to breathe for him at night so he can sleep, but whenever the mask slides, an alarm wakes Karina up to fix it. One day, Bill takes Karina aside and tells her she must take care of herself; she should also consider forgiving Richard to get closure for herself before it is too late.

Grace confronts Richard with the feeling she has held her whole life that he chose piano over her. He cries and apologizes, but his voice production is now too slow to explain all his feelings. He writes another letter to his father explaining how much it hurt to be scorned because he was musical instead of athletic like his brothers. Karina interrupts to tell Richard his father has died. Richard, Grace, and Karina travel for the funeral. Afterward, the family gathers and must confront Richard’s ALS for the first time. His brothers reveal that they have followed his career with pride. Although their father left Richard out of his will, they will split it with Richard, as is right. Richard puts to rest his resentment against his father.

Karina finally agrees to go to New Orleans with Elise and her students while Grace watches Richard. Grace avoids her father, but one evening his right leg gives out and he falls face-first, breaking his nose. Grace is not strong enough to move him, so they both camp in the hallway. Richard finally apologizes for every way he has failed her, and she tells him she loves him. In New Orleans, Karina feels her identity as a jazz pianist reawaken. She realizes that she has used Richard’s career, Grace’s birth, Richard’s affairs, and now Richard’s illness as excuses to hide her fear of failing. When she returns, Richard sees a new lightness in her and recognizes again the fearless young woman he fell in love with decades before. Richard’s apartment finally sells, and Karina rescues his Steinway grand piano. He asks her to play jazz for him. One afternoon, Richard suddenly cannot breathe. He is placed on mechanical ventilation at the hospital.

Richard has two choices: tracheostomy surgery and 24/7 care for the rest of his life as the disease continues to progress, or removal of external air supply until he dies naturally. He knows the choice is his life or Karina’s freedom. Karina avoids him for 24 hours, but when she returns his choice is “home.” She cries and thanks him. Grace and Bill arrive to witness Richard’s extubation. Karina plays Richard’s recording of Schumann’s Fantasie in C Major; he hopes she hears his apology and forgiveness in the passionate music.

Three days after leaving hospital, Richard spends most of his time sleeping. Karina sits by his side and finally reaches the forgiveness and apology she needed to give him, confronting her betrayal: while they were married, she lied that she was infertile, fearing that more children would trap her. She is playing Chopin on Richard’s piano when he dies. A week later, Karina finds a legacy message Richard recorded for her. In it, he says that his legacy will be Grace and Karina; he urges her to “Go-to New-York. Play-jazz. Life-your-life. Be-ha-ppy” (297).

In the back matter, the author urges readers to donate to ALS research and thanks the many people with ALS she met and formed friendships with. She reveals a new experimental treatment that could significantly slow ALS symptoms.

More summaries and resources for teaching or studying Every Note Played.