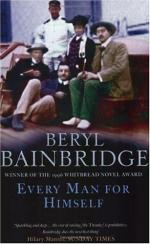 Every Man for Himself Themes

Beryl Bainbridge
This Study Guide consists of approximately 57 pages of chapter summaries, quotes, character analysis, themes, and more - everything you need to sharpen your knowledge of Every Man for Himself.

The upper classes are depicted as heavy drinkers. The ship workers in Ireland are frequently drunk on duty. Hopper is drunk when he injures Morgan playing racquetball. Embarrassed by the drunken spectacle he makes of himself after the Scurra-Wallis tryst, Morgan vows never to repeat it. He accepts a drink when his turn-around is toasted, for to refuse would be rude, and he takes a medicinal brandy to revive him from a faint. He is happy that for the most part he manages to break the habit, though. He observes that sobriety has a hallucinatory effect of its own. Captain Smith never drinks, Morgan observes, while talking with the steward about the skipper's extraordinary seamanship. The cause and effect seems obvious.

The stranger who dies in Morgan's arms at the beginning of the story becomes an on-going topic among the passengers aboard Titanic, exaggerated in the telling...

More summaries and resources for teaching or studying Every Man for Himself.

Every Man for Himself from BookRags. (c)2022 BookRags, Inc. All rights reserved.