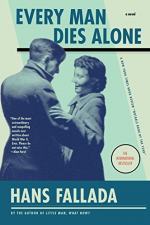 Hans Fallada
This Study Guide consists of approximately 124 pages of chapter summaries, quotes, character analysis, themes, and more - everything you need to sharpen your knowledge of Every Man Dies Alone.

A bird is used to represent the character of Otto Quangel who both physically and emotionally mirrors the attributes of a common bird. Otto is described frequently as having a bird-like face and a sharp beaked nose. In fact, it is interesting to note in the afterword of the novel, the mug shot of Otto Hampel, the actual postcard writer that the novel was modeled after. Herr Hampel does, indeed, have a sharp, pointed nose which must have struck Fallada as being similar to a bird's beak. Character-wise, Quangel also behaves similarly to a bird. He is always very aloof and distant from others, never speaking to others or allowing anyone to get close to him. He prefers to live as solitary a life a possible, only going about his work and providing for his family.

More summaries and resources for teaching or studying Every Man Dies Alone.