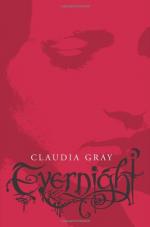 Claudia Gray
This Study Guide consists of approximately 33 pages of chapter summaries, quotes, character analysis, themes, and more - everything you need to sharpen your knowledge of Evernight.

Bianca is a sixteen-year-old girl who has the distinction of being one of only a few vampires born each century. Because she was born and has continued to grow through childhood, she is very different from the others who are vampires, including her parents. Bianca has always known she is a vampire and has been taught not to share the secret. She drinks blood and has from birth, beginning with goat blood in her bottle as an infant. She has also been taught that she will one day die and become a full-fledged vampire, though she doesn't fully grasp what all this means to her. She is now very unhappy because her parents have moved her from their previous home to Evernight, a school set up exclusively to teach vampires.

Lucas is a twenty-one-year-old posing as a typical teenage student at Evernight, and one of the few human students who have been admitted to the school. In truth, he is a member of the Black Cross, an organization of vampire hunters, and is seeking to gather information about Evernight, apparently with the intention of helping his group kill all the vampires there. Lucas initially believes he is protecting Bianca from the vampires at the school but eventually learns she is a vampire as well. She accidentally bites him one night and with that loss of control learns for herself what being a vampire really means. After that accident, she is careful with Lucas and he seems to give in to allow her to bite him again, though this time more gently. Bianca and Lucas discover that he's gaining vampiric attributes, such as increased speed and strength.

When they take this information along with their questions to Bianca's parents, it's accepted that Lucas will become a vampire and that Bianca will soon make the final transition herself to become a full-fledged vampire. However, during what Bianca assumes is an innocent conversation one day, her parents discover that Lucas is a member of the Black Cross and realize that he's been plotting to kill them.

Lucas runs away and Bianca joins the group following him. When their fear of running water stops full-fledged vampires at the river, Bianca forges ahead and catches up with Lucas. He pleads with her to hear him out and she leaves town with him. They arrive in Boston and Lucas calls his mom, another vampire hunter, but doesn't reveal that Bianca is a vampire. They are at an old church where the Black Cross members are gathering weapons when the other vampires arrive and begin to burn the church. Bianca realizes Lucas will die if she doesn't leave with her parents and the others, and she does so. At her urging, they allow Lucas and the others to survive and Bianca returns with her parents to Evernight.

More summaries and resources for teaching or studying Evernight.