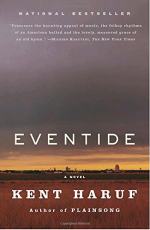 Related Topics
Plainsong
The Tie That Binds: A Novel
Where You Once Belonged: A Novel
Our Souls at Night
Benediction

Kent Haruf
This Study Guide consists of approximately 46 pages of chapter summaries, quotes, character analysis, themes, and more - everything you need to sharpen your knowledge of Eventide.

This detailed literature summary also contains Quotes and a Free Quiz on Eventide by Kent Haruf.

Eventide, a novel by Kent Haruf, follows the intersecting lives of residents in Holt, Colorado, over the course of three seasons. Character-driven, the novel is more focused on the human condition as opposed to plot. As a result, not much is said about the past lives of many of the characters. However,enough information is presented so that readers have a basic understanding of how each character arrived at their present situation.

Readers first meet the elderly McPheron brothers, Harold and Raymond, who are cattle ranchers. Both men are bachelors. In his youth, Harold was left with a broken heart by a girl he wanted. Less information is shared about Raymond’s early bachelorhood . Both Harold and Raymond have good hearts. They are traditional men who have taken in a nineteen year-old African-American (Victoria Roubideaux) and her young daughter (Katie). Victoria is from Denver. After leaving a bad relationship, Victoria asked the brothers for help. They have given her and Katie a home and treated her like a daughter. The brothers make sure that Victoria goes to college in Fort Collins. But, tragedy strikes when Harold is mauled to death by a bull, leaving Victoria saddened and Raymond heartbroken and alone.

Readers also meet Betty and Luther Wallace, who are both on disability. With the help of receiving food stamps, they are trying to care for their two children, eleven year-old Joy Rae and six year-old Richie, as best they can. Betty is constantly plagued by a pain in her stomach which no pills can help, while Luther is something of a passive bumbler. They are supervised by their case worker, Rose Tyler, who is a dark-haired, kind, and pretty middle-aged woman. Luther and Betty have their lives turned upside down when Betty’s abusive, alcoholic uncle, Hoyt Raines, insists on coming to stay with them. He becomes physically abusive toward the children. He also cows Betty and Luther into backing down from defending their children. When the abuse is discovered at school, Betty and Luther are put on notice. Hoyt is arrested, only later to be freed on a plea bargain.

Readers next meet DJ, whose parents are dead. DJ lives with his grandfather. DJ comes to develop a crush on his neighbor, Dena, who is the daughter of Mary Wells. Mary's husband is away working in Alaska. Mary falls apart when her husband leaves her, and a car accident leaves Dena and Mary's other daughter, Emma, severely hurt. The accident prompts Mary decision to start life over again in a city two hours away. DJ is heartbroken by Dena’s departure. While at the local tavern with his grandfather, DJ is demeaned by Hoyt. When Hoyt cruelly hits on the barmaid, DJ smashes a glass bottle over Hoyt’s face. This leads to Hoyt returning to Luther's and Betty's house. Hoyt threatens to kill Luther and Betty if they do not let him in and leave him alone. He then proceeds to viciously beat up Joy Rae and Richie.

Meanwhile, Victoria and some mutual friends set up Raymond on a date with Rose. Raymond and Rose hit things off and begin dating. Rose is later horrified by what Hoyt has done. He is now wanted by the police. However, until he is caught, Joy Rae and Richie are temporarily placed in foster care, which breaks the hearts of Luther and Betty.

Raymond is able to comfort Rose, telling her there was nothing more she could do. Raymond tells Rose that sometimes things are simply out of people’s hands. As the novel ends, Raymond continues to hold Rose, with neither one knowing what the future will bring.

More summaries and resources for teaching or studying Eventide.