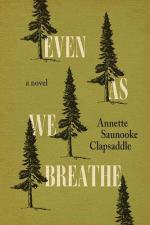 Even As We Breathe Summary & Study Guide

Annette Saunooke
This Study Guide consists of approximately 58 pages of chapter summaries, quotes, character analysis, themes, and more - everything you need to sharpen your knowledge of Even As We Breathe.

Even As We Breathe Summary & Study Guide Description

Even As We Breathe Summary & Study Guide includes comprehensive information and analysis to help you understand the book. This study guide contains the following sections:

This detailed literature summary also contains Quotes and a Free Quiz on Even As We Breathe by Annette Saunooke.

The following version of the book was used to create this study guide: Clapsaddle, Annette Saunooke. Even as we Breathe. University Press of Kentucky, Lexington, Kentucky, 2020. Kindle AZW file.

After Cowney Sequoyah has graduated high school, he decides that he does not belong at the local community college. He dreams of leaving behind the rural town of Cherokee where jobs are scarce and everyone knows everyone. Essie Stampers has definite plans to leave Cherokee by any means necessary, and she is looking forward to college. At the height of World War II, they both land jobs in the city of Asheville, North Carolina, at a resort that has become a minimum-security prison for foreign diplomats and their families. Cowney hopes the trip to the resort will afford them the opportunity to get better acquainted so their casual friendship can grow into something more.

The resort is elegant and would pass for an upscale tourist destination except for the fencing around the property, warning signs declaring it a government facility, and the soldiers stationed inside and out. Cowney is working outside one day when he finds a bone. He is drawn to it, wondering about its origin and even speaking to it when he is in the throes of grief. Essie is a maid. She discovers Room 447, which has not been used for some time and is furnished with chairs, books, and a set of dominoes. Cowney and Essie spend their evenings here, learning more about each other until Cowney is certain he is in love. One evening, he discovers a love note written to Essie from a “guest” named Andrea. Cowney later sees Essie and Andrea kissing. Essie believes she is going to Italy with Andrea when his family is released. Cowney's heart is broken, and their relationship cools, though they are still working together.

Cowney is summoned home when his grandmother, Lishie, is dying. Cowney's mother died soon after his birth, and his father died in World War I, leaving Lishie and her remaining son, Bud, to raise Cowney. Lishie is kind and wise while Bud is demanding and mean. Cowney is heartbroken at her death, and he accepts Essie's comforting presence during their few days on the reservation.

Back at the resort, Essie says Andrea has planned a picnic. Employees and guests are not supposed to mingle. Cowney worries that she will be fired, but he does not intervene. The soldiers are on high alert when they discover the daughter of one of the diplomats is missing, and they find Essie and Andrea. Essie's first thought is that Cowney must have reported them. She tells the soldiers about the bone Cowney has, hoping to point their attention away from her relationship with Andrea. Suspicion is heightened by the prejudice against Indians. Additionally, there is a statement by a soldier named Peter Franks who has vague memories of Cowney with the missing girl.

Cowney contacts Jonathan Craig, a veteran and an FBI agent. Jon helps Cowney out of the situation at the resort. However, he also reveals that Cowney's father committed suicide, answering questions Cowney always had about his father's death. Over the coming weeks, Bud becomes sick. On his deathbed, Bud confesses that he had an affair with Cowney's mother and that he is Cowney's biological father. They do not reconcile, but Cowney finds he is beginning to feel differently. Essie arrives as Bud is dying, revealing that Andrea and his family left without her. She knows Cowney loves her; but, she says she is determined to get away from the reservation and that marrying someone who can provide that is her top priority. Over the years, she travels some and settles in Connecticut where she raises her family. Cowney also travels but returns to Cherokee to live out his final years. As the novel comes to an end, Cowney reveals that he has addressed this story to Essie's granddaughter who has arrived in Cherokee to bury Essie, in keeping with her final wishes.

More summaries and resources for teaching or studying Even As We Breathe.

Even As We Breathe from BookRags. (c)2022 BookRags, Inc. All rights reserved.