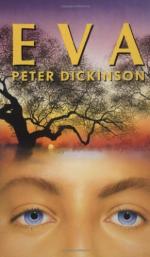 Peter Dickinson
This Study Guide consists of approximately 41 pages of chapter summaries, quotes, character analysis, themes, and more - everything you need to sharpen your knowledge of Eva.

This unnamed facility is where Eva first comes to physical consciousness after her essential inner identity is transplanted into the body of the chimpanzee Kelly.

While in the facility, Eva learns to communicate by typing her ideas and words onto a keyboard that translates them into sound, specifically by filtering them through recordings made of Eva's pre-transplant voice. This means that when post-transplant Eva speaks, even when she's old, her "voice" is that of her eleven year old self.

The shaper is the name given to what today might be described as a combination television and hologram projector, a device that broadcasts prerecorded material and also enables communications.

Early in the narrative, Eva's dreams of trees are vivid and powerful echoes of Kelly's pre-transplant species memory. In other words, although Kelly was raised entirely in an urban-textured captivity, somewhere...

More summaries and resources for teaching or studying Eva.