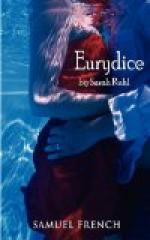 Related Topics
Smile: The Story of a Face

This detailed literature summary also contains Quotes and a Free Quiz on Eurydice by Sarah Ruhl.

The following version of this book was used to create the guide: Ruhl, Sarah. Eurydice. Samuel French, 2008.

Sarah Ruhl's Eurydice is divided into three movements (acts). The first takes place only in the world above. The second and the third take place only in the underworld. This play is based on the classical Greek myth of Orpheus and Eurydice. However, unlike in the myth, both Orpheus and Eurydice are human. In Movement One, the reader or the audience see their engagement and their wedding, which is not mentioned in the myth. Eurydice's father cannot attend their wedding, as he has already died and gone to the underworld. However, he writes a wedding speech, and he gives it to a worm whom he hopes will find Eurydice.

In Movement Two, Eurydice meets her father in the underworld. She does not recognize him. Like most of the dead, she has dipped herself in the river and lost her memories. Her father, who was not held in the river long enough, still remembers how to read and write. He has also retained all of his memories. Since he knows Eurydice's relationship to him, he cares for her. When she says she would like to go to her room, he builds a house out of string. Gradually, he teaches her how to speak again. Her father and she slowly rebuild their former emotional bond, sharing unconventional definitions for words. When her father reads aloud to her from a letter Orpheus has sent, she remembers Orpheus is her husband. Suddenly, she recognizes her father too, and she embraces him. He teaches her to read. Together, they read a book Orpheus sent.

When Eurydice returns to the underworld in Movement Three, she finds her father has dipped himself into the river. Terribly lonely without his daughter, he decides to lose his memories instead of living with them. Eurydice tries to reawaken her father by teaching him how to spell her name, but he is unconscious. The Lord of the Underworld, who is played by the same actor who plays The Nasty Interesting Man and has the same sexual aggressiveness, demands Eurydice marry him now that she has returned to the underworld. Eurydice does not want to marry The Lord of the Underworld. Nor does she want to live without her father. Instead she leaves a letter for Orpheus. Then she dips herself in the river. She falls down beside her father, unconscious. As soon as Eurydice has fallen, Orpheus descends to the underworld a second time. This time, he is in the elevator that rains on the inside. Unlike Eurydice in Movement One, he does not have an umbrella to shield him from the rain inside the elevator. He is happy when he sees Eurydice. When the rainwater falls inside the elevator, the water washes away his memories of her, as water usually does for the dead. He finds Eurydice's letter. He picks it up. He cannot read it.