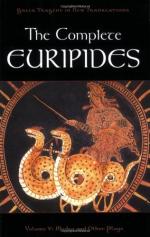 Euripides
This Study Guide consists of approximately 45 pages of chapter summaries, quotes, character analysis, themes, and more - everything you need to sharpen your knowledge of Euripides V.

This detailed literature summary also contains Topics for Discussion and a Free Quiz on Euripides V by Euripides.

Euripides V is a collection of three Greek tragedies by Euripides. Electra tells the story of Electra and her brother Orestes revenging their father's death by killing his murderers: their mother Clytemnestra and her new husband Aegisthus. The Phoenician Women tells the story of Oedipus's sons, Polyneices and Eteocles, who battle over control of Thebes, killing each other. The Bacchae details Dionysus's revenge on the city of Thebes for refusing to worship him as a god.

In Electra, after Agamemnon, Electra and Orestes' father, returned victorious from Troy, his wife Clytemnestra and her lover Aegisthus murdered him. Now, Clytemnestra and Aegisthus rule the land. Electra has been given to a kindly, but poor, farmer as a wife, and Orestes is exiled. Orestes returns, and with the help of Agamemnon's old servant, finds Aegisthus alone with a few servants, ready to make a sacrifice of a bull. Orestes, while butchering the animal, takes the knife and plunges it into Aegisthus.

Meanwhile, Electra sends word to her mother that she's ill after bearing a son, and Clytemnestra comes to Electra's house. Electra condemns Clytemnestra for her behavior and lures her into the house, where Orestes is waiting to kill her. After the murders, Electra is exiled to live in a foreign land with a new husband, while Orestes must stand trial for his actions in Athens, where he will be narrowly acquitted.

In The Phoenician Women, Oedipus's family is cursed because he unknowingly killed his father and married his mother, Jocasta. Oedipus has gouged his eyes out and is kept locked in the castle. Because of Oedipus's sins, his sons have been cursed to kill each other. To avoid conflict, they agree to each rule the kingdom of Thebes every other year and live in exile the other years. However, Eteocles will not give up the kingdom at the end of his first year of rule. Polyneices comes with an army to take the kingdom back by force. After Polyneices' army is routed, the brothers decide to settle the dispute in a one-on-one battle, and they kill each other, fulfilling the curse.

In The Bacchae, the god Dionysus comes to his home city of Thebes in disguise as a man to revenge himself on the people for refusing to worship him. He drives the women of the city insane and sends them out on the mountainside. The ruler of Thebes, Pentheus, tries to arrest Dionysus and imprison him, so Dionysus calls down earthquakes and lightning to destroy the palace. Pentheus still does not believe in Dionysus.

Dionysus takes over Pentheus's mind and makes him dress in women's clothing, humiliating him. Then, Dionysus leads Pentheus out to the mountainside to see the women. Believing they are hunting a mountain lion, the women, led by Pentheus's mother Agave, tear Pentheus limb from limb. She is horrified when she comes to her senses and realizes that she's killed her son. Dionysus sends Agave and her sisters into exile and turns the founder of Thebes into a serpent, completing his revenge on the city for disbelieving in him.

More summaries and resources for teaching or studying Euripides V.