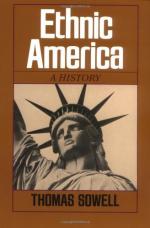 Thomas Sowell
This Study Guide consists of approximately 29 pages of chapter summaries, quotes, character analysis, themes, and more - everything you need to sharpen your knowledge of Ethnic America.

This detailed literature summary also contains Topics for Discussion and a Free Quiz on Ethnic America: A History by Thomas Sowell.

Ethnic America, written by economist and historian Thomas Sowell, is a history of nine ethnic groups that immigrate to the United States. Sowell's aim is to illustrate important points about history, economics, social science, social philosophy and social policy in these histories in order to draw certain lessons towards the end of the book. Yet the histories are of great interest in themselves, as they tell the human story of the profound struggles and impressive achievements of the individuals within these groups.

In Chapter 1, Sowell outlines the ethnic groups that he will discuss, and the metrics upon which he will measure their successes and failures. He also stresses intragroup diversity and the relationship of these ethnic groups to American society as a whole. To this day, important differences between ethnic groups remain with respect to wealth, health, IQs, education level and so on. Age is another important difference, which is often overlooked. The time of immigration and the area where a group immigrated are also particularly important to understanding the progress of an ethnic group.

The next four chapters cover four ethnic groups that emigrated from Europe. Chapter 2 covers the Irish, who were among the first major immigrant groups to the United States following the presence of the majority of Anglo-Americans. Sowell notes that initially the Irish faced profound political and social resistance to their physical presence in the United States and to their cultural progress. Yet over time, they overcame extreme poverty, lack of literacy and high crime rates to wholly normalize as part of American society. Chapter 3 covers German immigrants, who have large intragroup diversity and have immigrated to the United States over a long period of time, giving them little intragroup identity. Chapter 4 covers the Jews, showing how this group, sometimes facing the greatest adversity, has triumphed beyond any other group on every level. They are, in Sowell's mind, a great American success story. The Italians are covered in Chapter 5.

Chapters 6 and 7 discuss Americans who emigrated from Asia, the Chinese and the Japanese. Many often forget how ruthlessly American society discriminated against Asians. They, unlike other ethnic minorities, succeeded while remaining hidden and unobtrusive in American social life.

Chapter 8 covers the major American group from Africa, the Blacks. They are the only group brought to the United States by force and their extremely long legacy of ruthless oppression has held them back in important respects; yet even after being freed black culture did not effectively develop a culture with values that promoted their self-development. Nonetheless, blacks have improved across the board on most major social metrics. Chapters 9 and 10 cover immigrants from Latin America, particularly Mexicans and Puerto Ricans. Mexican American history is particularly multifaceted, whereas Puerto Rican American history is young.

In Chapter 11, Sowell discusses various implications of his study, emphasizing in particular that cultural values matter, that some cultures adapt more effectively than others, and that blame for cultural failure cannot always be placed on institutional or social failure. Some groups have triumphed against adversity due to their perseverance, self-reliance, cultural values, and willingness to assimilate; others have not. Political correctness should not prevent social theorists in attending to these and other important facts.

The reader should bear in mind that this book was written in 1981 and that much has changed for the groups discussed in the book.