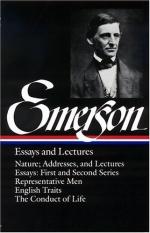 This is a collection of the works by one of the great thinkers of the nineteenth century. This man is also significant in that he represented a relatively new form at the time in which he writes. He is an American scholar. At this point, the United States of America is still young enough as a nation for this to be an exciting new tradition. As is the case with children, while worthy of respect, there is sometimes a problem with taking them seriously. Here, one of the Americans has done some thinking and writing. Will the other Americans, and even the Europeans take the man's work seriously?

Emerson was a philosopher, among other things. Many of the earlier writings in the book are actually written versions of public speeches that he gave. Within these, he addresses the working world - especially when his speech is directed towards a graduating class. He also includes some discussions of morality, ethics and the work place during these times. The spiritual situation of America as a nation is but one of Emerson's main themes. Readers may remind themselves that the appropriation of the term "America" for the country, when this is also the name of a continent, can be viewed as both legitimate and as dubious.

There is more than one type of work in this book. First there is a set of lectures. These are followed by two series of essays. Each is self-contained and able to read as a complete work without the rest. The author covers a broad range of topics, ranging from metaphysics and politics to more detailed descriptions of what makes America unique. Emerson's thought and the education that support it are shared in a manner that has a natural feeling.

After surveying virtues through essays on Representative Men, the author proceeds on to a lengthy discussion of the English. There are nineteen essays on aspects of the lives of the English. This is followed by a section devoted to analyzing guides for behavior. The work ends with another sizable body of short literary pieces. These are grouped together as Uncollected Prose. In totality, this work provides readers with an extensive survey of Emerson's philosophy. It also doubles as an excellent cultural history for the nineteenth century. Emerson has proven to be viewed in the twentieth and early twenty-first centuries as one of the great American minds of the nineteenth century.