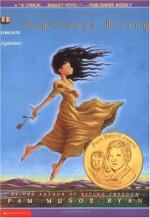 Pam Munoz Ryan
This Study Guide consists of approximately 36 pages of chapter summaries, quotes, character analysis, themes, and more - everything you need to sharpen your knowledge of Esperanza Rising.

This detailed literature summary also contains Topics for Discussion and a Free Quiz on Esperanza Rising by Pam Munoz Ryan.

Esperanza Ortega is a young girl, who grows up in Mexico in the 1920's on Rancho de las Rosas, a vineyard her family owns. Mexico is recovering from the revolution of ten years earlier. There is still a great deal of animosity towards the rich landowners, who are seen to be uncaring of the peasants. The story opens, as she is anticipating the harvest of the grapes from their vineyard that always coincides with her birthday. At the end of the harvest, there is always a wonderful fiesta attended by the servants, vaqueros, campesinos, and many of the wealthy families in the area. The afternoon before the iLa cosecha, or harvest ceremony, Esperanza cuts her finger on a rose thorn, while she is gathering roses for table decorations the next day. As she is thinking this is bad luck, the plot begins.

That evening her mother, Abuelita, who is her grandmother, and Hortenisa, the faithful housekeeper, who has been with them for many years, are very concerned, because her father is late coming home from the fields. Finally, the ranch foreman and his son are sent to look for Papa. Before they arrive back home, two stepbrothers of her father, Tio Luis and Tio Marco, come to the house with Papa's silver belt buckle. It's a very bad sign. Later that night, the ranch foreman and his son return to the house with a wagon carrying the dead body of Papa.

Several days later a lawyer tells Esperanza and her mother that the ranch house and the grapes in the vineyard now belong to them, but, since women are not allowed to own property, the land belongs to the bank. The bank president happens to be Tio Luis, who is not liked, as he is a crooked businessman and has been unfriendly to the family. He is also an aspiring politician trying to gain credibility in the community.

Tio Luis offers to buy the house from Mama, but at an amount much lower than it is worth. When she turns him down, he has a second proposal, this one of marriage. She loathes the idea and tells him so, but he reminds her that he is now her landlord, and he can make it very difficult on her if she does not accept his offer of marriage.

The next night, the family wakes to find their house on fire. All is lost, including the grapevines and Papa's beloved rose garden. Tio Luis arrives the next day to repeat his proposal, and to say that more harm could come to them if she doesn't reconsider his offer of marriage. She finally gives in, and he spreads the word to everyone in the area that they plan to wed.

To avoid the marriage, Mama and Esperanza go to the United Sates with their foreman, his wife, and their son. There they must find work in the fields, and Esperanza finds it especially difficult as she has led a sheltered and spoiled life to this point. Their life in a work camp is very hard, and mama becomes ill and must spend several months in the hospital. In order to help her get well, Esperanza must earn money to bring Abuelita from Mexico to be with her.

Her friend, Miguel, steals Esperanza's money and he disappears. Esperanza is very depressed at not being able to help her mother. Finally, Miguel returns with Abuelita after having gone to Mexico with Esperanza's money to bring Abuelita to California.

More summaries and resources for teaching or studying Esperanza Rising.