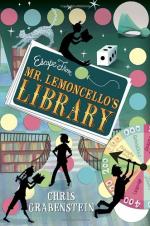 This detailed literature summary also contains Quotes and a Free Quiz on Escape from Mr. Lemoncello's Library by Chris Grabenstein.

Escape from Mr. Lemoncello's Library, by Chris Grabenstein, is the story of an eccentric billionaire named Luigi Lemoncello and his plan to share his love of libraries with the children of Alexandriaville. Lemoncello gives a great deal of money to have the former Gold Leaf Bank renovated as the town’s new library. As a game guru, he has equipped his library with all sorts of high tech electronic gadgets and gizmos, including the Electronic Learning Center filled with interactive games and tools. Lemoncello's library also contains a salute to Gail Tobin, the librarian who helped him develop and market his first game.

Hoping that the children will learn to love their town library just as much as Lemoncello loved the library as a child, Lemoncello has the head librarian, Dr. Yanina Zinchenko, put together a challenge in which students must find a secret passageway out of the library as a gift for his birthday. The contestants must answer quizzes and riddles using information they find in the library to gather clues that point them to the escape route. Until the last hours of the competition, Lemoncello watches the children through video cameras. Then, he joins them to see how the game will turn out. One contestant is bent on winning, even if it means cheating, bullying, and stealing. However, Kyle Keeley and his teammates prevail in the end by playing the game fairly. The team shows that even sentimental saps and bookworms are winners in their own way. Kyle and his four friends find the escape route from the library just in time to claim the grand prize of serving as Lemoncello's spokesmen. Though the prize is fantastic, the lessons that Kyle learns about the library, reading, and teamwork are life-changing.