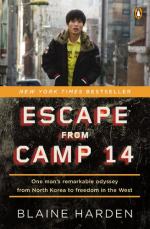 This detailed literature summary also contains Topics for Discussion on Escape from Camp 14 by Blaine Harden.

“Escape from Camp 14” by Blaine Harden is the true story of Shin In Geun who was born and raised in a political prison camp in North Korea. Shin knew nothing of the outside world. He lived in small dormitory quarters with his mother who resented him and treated him with disdain. She left early each day to work in the fields. When she returned home for lunch, she would often find that Shin had eaten her lunch as well as his own. She would beat him for this transgression because she had to return to work in the field on an empty stomach. Shin didn’t mind the beatings because he liked the extra food. It was a matter of survival in the prison camps. He considered his mother as a competitor for food.

Children of the prison camps were required to attend school six days a week for ten hours each day. The prison camp schools were run by nameless teachers and guards, and the curriculum wasn’t a typical one. The children were taught nothing about geography. So, they did not know the countries that surrounded their own. They were also not taught North Korean history. Instead, they learned the benefits of snitching on each other and their parents, as well as working in the fields and the coal mines. They were taught how to be introspective and share their sins with the teachers so they could be beaten in front of the class.

At sixteen, Shin was moved away from his mother’s room to live in a dormitory with the other boys, all of whom were now workers. Snitching was encouraged, and punishments were handed out for violations or perceived violations. Punishments included beatings and torture and even death. Shin became upset at his mother for cooking rice for his older brother and giving him corn gruel. He overheard them discussing escape plans and turned them into the guards. His mother and brother were caught and stopped. Shin and his father had to watch his mother being hanged and his brother shot to death. Shin didn’t feel bad; he felt they deserved it for trying to escape.

After Shin was assigned to work on a pig farm, he felt he would live out his days on the farm. It wasn’t hard work and there was a lot of food he could steal. But, he was moved to a garment factory where he met a new arrival, a highly educated prisoner who befriended him and told him about the vast world and opportunities that existed outside the prison camp. Ultimately, the two planned to escape. Tragically, Shin’s friend was electrocuted while trying to climb over the fence. Miraculously, Shin survived the electric shock and was able to make it over the fence.

Shin embarked on an odyssey around China for the next year. He was always looking over his shoulder out of fear that he would be arrested. He finally made it to safety in South Korea where he was made a citizen. But, his transition to freedom was a difficult one. For twenty-three years he had focused on getting enough to eat. He didn’t know what to do with liberty. He eventually moved to the United States where he became part of a human rights organization.

Shin was haunted by the deaths of his mother and brother. He finally allowed himself to feel shame and guilt for his part in their executions. He was diagnosed with post-traumatic stress disorder. It took years for him to get to a better place. He met a young Korean American and formed his first close relationship with a woman. Now, the two are hoping to be a beacon of light for other North Korean defectors who struggle with the transition to normal life.