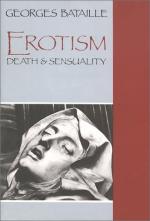 Georges Bataille
This Study Guide consists of approximately 30 pages of chapter summaries, quotes, character analysis, themes, and more - everything you need to sharpen your knowledge of Erotism.

This book, written in 1957, places both eroticism (an experience of sexual stimulation) and death at the core of fundamental human experience. Examining both within the thematic context of what society defines as "taboo", the author explores themes relating to the necessity and meaning of transgressing such taboos, as well as the existential tension between continuity (union) and discontinuity (separation).

The author introduces his examination of the relationship between eroticism and death, as well as other aspects of human existence and relationships, with an expression of his intention to undertake this examination from a non-scientific perspective. That particular perspective, he suggests, considers facts and experiences in isolation from one another, rather than as components of what contemporary theorists and practitioners might call a "holistic" or "organic" approach. In other words, he is interested in how aspects of being human relate to and with each other, rather than considering them on their own merits and meanings.

Following the introduction, the book is divided into two parts. The first, and larger, is headed "Taboos and Transgressions", and explores the nature, purpose and evolution of various taboos (forbidden experiences). As part of his exploration, he suggests that most taboos emerged from the experiences and perspectives of pre-historic humanity as the race evolved into a deeper, broader awareness of what existence, including death, means and/or involves. He also suggests that at the same time as awareness and practice of taboos evolved, so too did the idea of transgression, of breaking those taboos, which he further contends is an integral part of the human experience of both day to day existence and evolution.

An important touchstone for the author as he explores these issues is how Christianity has, over the centuries of its existence, played a defining role in the shaping and evolution of various taboos. This, he suggests, is the result of Christianity having gone in the opposite direction from what he suggests is religion's core function: a reaching for an experience of continuity with that which lies beyond the physical world. Christianity, he contends, is ultimately grounded in various manifestations of discontinuity, or separation.

The second part of the book is titled "Some Aspects of Eroticism". The author begins this section with consideration of the famous Kinsey Reports. Researched and written in the 1950s, the Reports summarized the first comprehensive, scientifically-based research into human sexual behavior and activity. The author of "Eroticism" uses material from the Reports to support his arguments in favor of a broader recognition of sexuality, but at the same time suggests that the methodology of the Reports is both flawed and limited.

The rest of "Some Aspects ..." is taken up with consideration of the work of other seminal writers on questions related to eroticism and sexuality. The first of these is the infamous Marquis de Sade, whose explorations of the relationship between suffering and sexuality led to the coining of the term "sadism" to describe the experience of getting pleasure, sexual or otherwise, out of inflicting pain. The second writer analyzed by the author is Claude Lévi-Strauss who, the author comments, explored the relationship between eroticism and incest. Finally, he again explores the relationship between sexuality and spirituality, drawing parallels between the emotionally and/or physically ecstatic experiences of those living intensely spiritual lives and those having an intense experience of sexual pleasure.