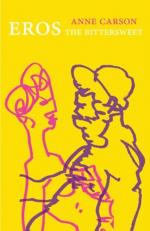 Plot Summary
+Chapters Summary and Analysis
Prologue, Chapters 1-6, Bittersweet, Gone, Ruse, Tactics, The Reach, Finding the Edge
Chapters 7-12, Logic at the Edge, Archiolochos at Edge, Alphabetic Edge, What Does the Lover Want from Love?, Symbolon, A Novel Sense
Chapter 13-18, A Novel Sense, Something Paradoxical, My Page Makes Love, Letters, Letters, Folded Meanings, Bellerophon Is Quite Wrong After All
Chapters 19-24, Realist, Ice-pleasure, Now Then, Erotikos Logos, The Sidestep, Damage to the Living
Chapters 25-30, Midas, Cicadas, Gardening for Fun and Profit, Something Serious Is Missing, Takeover, Read Me the Bit Again
Chapter 31-34, Then Ends Where Now Begins, What a Difference a Wing Makes, What Is This Dialogue About?, Mythoplokos
Characters
Objects/Places
Themes
Style
Quotes
Topics for Discussion
Order our Eros the Bittersweet Study Guide

Anne Carson
This Study Guide consists of approximately 19 pages of chapter summaries, quotes, character analysis, themes, and more - everything you need to sharpen your knowledge of Eros the Bittersweet.

This detailed literature summary also contains Topics for Discussion on Eros the Bittersweet by Anne Carson.

Eros: The Bittersweet was written by Canadian poet of professor of Classics and comparative literature Anne Carson. Carson is an expert in ancient Greek literature, particularly poetry. As such, she employs her knowledge of the structure and purpose of, in particular, the Socratic dialogues and Greek lyric poetry to analyze the nature of love and the deep connection between love and linguistic devices like metaphors.

The two primary sources of analysis that are threaded throughout the book are Sappho's Fragment 31 and two Socratic dialogues, the Phaedrus and the Lysias. The beginning of the book focuses on Sappho, one of the great Greek lyric poets, being born somewhere between 630 and 612 B.C. Little of her poetry survives. Fragment 31 concerns the bittersweet nature of Eros. The Socratic dialogues the Lysias and the Phaedrus concern both the nature of love and the nature of language and their connection. However, many more ancient Greek pieces are analyzed.

Eros: The Bittersweet is primarily focused on explaining the nature of romantic love, or Eros. Carson's primary claim is that Eros is necessarily bittersweet, that it cannot be separated from its paradoxical combination of pleasure and pain. The lover only has Eros when she wants what she cannot have, and so when she faces love, she engages in a triangular relationship between the lover, the loved and the space between them.

The pleasure of love comes from desiring something that is distant and the pain comes from the realization, first, that one is separated from the beloved, second, that the lover has given part of herself away and wants it back, and third, that the love cannot last forever and seeks its own resolution. Fourth, there is a kind of falsity in love because it aims to make the possible actual by bringing the dream of Eros into reality. The problem is that the lover inevitably distorts and exaggerates the reality of the loved such that having the loved is a disappointment.

Carson argues that there is a deep analogy between the lover on the one hand and the writer and the reader on the other. She claims that when the writer writes, she tries to capture in words her imagination, bringing the possible back to the actual and finding both pleasure and disappointment in capturing the reality in her mind. The reader also lusts to finish a good book, but simultaneously does not want the book to end. She is compelled forward to the end of what she desires because she desires it.

Carson often analogizes all three phenomena to the nature of the metaphor, which imperfectly captures the real in a symbol. She focuses on the differences between oral and written communication in Greek culture to accentuate the connection she draws between love and language in classical Greek writings. Eros: The Bittersweet is a short book but packed with meaning; the reader will want to read the book with some knowledge of ancient Greek culture, philosophy and history in order to fully appreciate it.

More summaries and resources for teaching or studying Eros the Bittersweet.